The Exiled Kalphite Hive is an area in the Kharidian Desert that was released on 14 January 2013. It is located south of the Jaldraocht Pyramid and north of Menaphos.

The Hive is home to the fearsome Kalphite King as well as a variety of high-level minions. Even "standard" kalphites like the soldiers and guardians are higher level, and other areas hold new kalphite types that attack with magic. 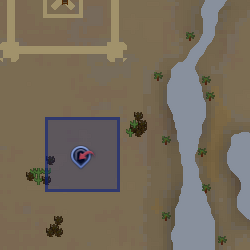 There are various ways to get to the Exiled Kalphite Hive quickly:

When players enter, they will have to navigate a short tunnel filled with aggressive exiled kalphite guardians (level 98) in order to reach the entrance to the Kalphite King's lair. Expect a magical shot or two as you pass by the opening to the Kalphite Graveyard, for instance.

Upon reaching the Kalphite King's upper antechamber and ladder to his lair, there will be a tunnel blocked by debris which can be cleared away. This creates a shortcut from the entry chamber, allowing the tunnel to be used as a shortcut to the Kalphite King and the Exiled Kalphite Queen.

If a player dies while fighting the Kalphite King their gravestone will appear in the Kalphite Graveyard. Players should take some food with them, as it's guarded by 4 spell-firing exiled kalphite marauders (level 98).

The Kalphite King isn't the only attraction here.

Players with a kalphite Slayer assignment will find that this hive offers significantly better combat experience per kill (roughly two times more) and better Slayer experience (usually 150%+) compared to the Kalphite Hive. There are safe spots to mage or range opponents, but players will have to think tactically if they want to face just 1 kalphite at a time. In addition, the kalphites are of a higher level and group in clusters more often.

Unlike the regular Kalphite Hive, the Kalphites in the Exiled Hive drop damaged chitin. If the player has at least 60 Smithing, they can turn the chitin into tradeable chitin scraps, used to repair drygore weaponry dropped by the Kalphite King. There's no handy anvil, so players need to decide if they wish to clutter up their inventory with it. If so, high-level Beast of Burden Summoning familiars are handy. It's also good profit, because one can earn up to 3,600 per damaged chitin.

Kalphites found here also have better drops than their lesser kalphite brethren in the main hive, dropping crimson and blue charms much more frequently than the gold charms dropped by the kalphites in the main hive.

The main drawback to training here is the dungeon's distance from a bank. However, there are a few options for players who have completed the quests Desert Treasure which unlocks the Bandit Camp lodestone, Contact! to unlock access to Sophanem's bank, or The Jack of Spades to unlock access to Menaphos's bank and lodestone. Alternatively, the Exiled Kalphite Hive is very close to the fairy ring network.

Retrieved from "https://runescape.fandom.com/wiki/Exiled_Kalphite_Hive?oldid=24308881"
Community content is available under CC-BY-SA unless otherwise noted.