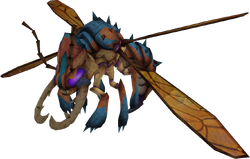 Players may leave her lair by right clicking on the slope that they used to enter her lair, or by teleporting.

As she has the same unique drops as the original Kalphite Queen, obtaining all unique drops will unlock the [Name] the Queenslayer title.

As the Exiled Queen is simply a stronger variant of the Kalphite Queen, the same strategies can be applied. However, there are no safespots in her lair and she also has two Exiled kalphite guardians and marauders close to her, so players can expect to take more damage while fighting her.

Retrieved from "https://runescape.fandom.com/wiki/Exiled_Kalphite_Queen?oldid=22749687"
Community content is available under CC-BY-SA unless otherwise noted.