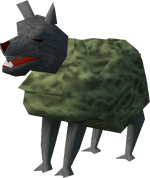 Experiments are found in the Experiment cave, which is accessed during the Creature of Fenkenstrain quest. Completing the quest is not required to kill them, as you can simply push the farthest memorial from Fenkenstrain's Castle to access the area. In total, there are 18 experiment spawns in the cave: 7 sheep-dogs, 5 spider-men, and 6 wolf-women.

The wolf-women can only be killed during the Creature of Fenkenstrain quest. Attempting to kill one afterwards results in the message: "You don't have the heart to kill the poor creature again."

An experiment must be killed to obtain an experiment bone for the Rag and Bone Man's wish list, and to complete the Lab Clean-up Assistant achievement.