RuneScape Wiki
Register
Don't have an account?
Sign In
Advertisement
in: Needs head developer added, Miniquests, Eye for an Eye,
and 2 more

Eye for an Eye

View source
watch 02:52
Roblox: DeepWoken - The Loop
Do you like this video?
Play Sound
For other uses, see Eye for an Eye (disambiguation).
[view] • [talk]

Eye for an Eye is part of the Tales of the Arc miniquest series. The miniquest requires completion of Jed Hunter and having Cyclosis discovered in the Player-owned port minigame.

Talk to Ichi on the eastern part of Cyclosis. After some encouragement, he tells you that various cyclops citizens have gone missing at night. Talk to Lookout Ekahi to advance to nightfall.

Talk to your faithful Lookout, and he tells you that unlike other cyclopes, he can see in the dark, as he has perfect vision. He tells you he sees movement by the towers of Sun and Moon which are between the path to the pier.

You must run south-west and kill 27 Zyclops before they abduct another cyclops. If you are able to kill them all as they come up from the pier, then your job is easier. However, some may slip past you.

If you want to see where the 3 waves will go to, don't talk to Lookout yet and explore the area to locate the 3 neighbourhoods. You will not be able to open your world map because it is too dark. Talk to the Lookout to continue.

When they are dead, talk to Ekahi to advance to morning. Speak with Ichi and Ekahi again.

Speak with See the Moon Priestess near the divination spot to the southwest, and ask her about the Zyclops. She tells you that salt can be used to ward off evil spirits. Collect 30 sea salt from the salty crabletines on the north-western coast of the island if you do not have any yet, then talk to Sinuman, who is located to the north-east of the bank. She gives you a bag of crushed salt. Then, go west of the banker Kotahi and talk to Daya the Sun Priest, who will bless your salt.

Return of an old foe

Speak with Ichi who will ask you to look for Ekahi because it is approaching nightfall. It will now be night again on the island. Next, you will need to go to the far north-eastern shore of the island. To get there, first go to the north-western most coast of the island (where the crabletines were during the day) and travel north-east along the narrow section of beach. Talk to Undead Jed and fight him. If Jed and Ekahi are missing, you must talk to Ichi, once in nightfall mode, to make them appear. You will easily defeat Jed and then be transported to the dock next to your ship. Speak with Ekahi once more to complete the miniquest. 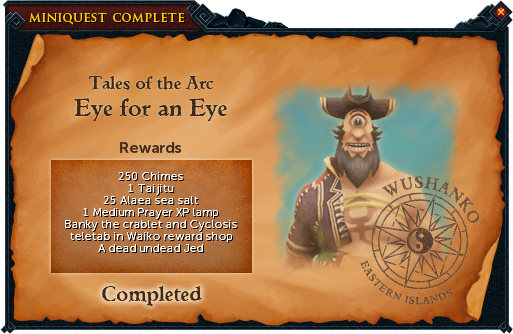