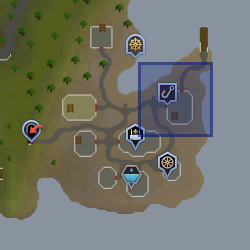 Ezekial Lovecraft sells and buys fish and bait in the town of Witchaven. He sells all normal Fishing equipment from his shop called Lovecraft's Tackle.

His skin is a sickly yellow colour though this is apparently not caused by sea slug possession. His skin tone is suggested to have been caused by eating too much fish and having no fruit in his diet—in fact, not even knowing what a fruit is—as stated during Salt in the Wound.

He plays a part in The Slug Menace and Kennith's Concerns quests and is involved heavily and playable in Salt in the Wound, a quest where he, along with Kennith, Eva and the player eliminate the sea slugs threat from Witchaven once and for all.

Selling rubium to Ezekial is one of the medium Ardougne achievements. Players can mine some in the mines where they had to solve the mazes in Kennith's Concerns and sell it to him.

During the Slug Menace quest he gives the player page 2 of Brother Maledict's holy book which he mysteriously received by someone who pushed it under his door, most likely agents of the slugs like Mayor Hobb, Brother Maledict, or Col. Jake O'Niall as these pages are used to craft special runes to be used as keys to free Mother Mallum from her imprisonment.

He plays a major role in this quest where he greatly assists the player by helping him find a way to pass the underground room to reach Kimberly's parents.

At the starting of the quest, he is teleported to Daemonheim without finishing his tuna sandwich. He becomes "skulled" as he kills Elfinlocks, albeit accidentally and humorously, after attempting to make an entrance into Daemonheim by blowing up some rocks. Throughout the quest, he attacks using ranged, mainly from his homemade rubium grenades and acts as a sort of comic relief. During the events of the final battle, he and Kennith throws the anti-mind control serum onto Mother Mallum, thereby partially freeing the player from her control.

Retrieved from "https://runescape.fandom.com/wiki/Ezekial_Lovecraft?oldid=24562347"
Community content is available under CC-BY-SA unless otherwise noted.