Looks after the factory. 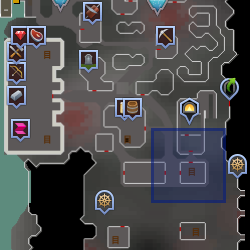 The Factory Manager owns the large factory in eastern Keldagrim that houses the blast furnace.

Until the addition of the blast furnace, the factory was run solely by the manager. It produced basic smithing items such as metal sheets, as was evident by the machines inside. The factory manager refused to allow players access to the factory. However, he could be bribed with 100 coins, which would allow the player to use the furnace inside the factory. The player would have to pay again in ten minutes.

Some time after the city's opening, the Consortium payed the manager to allow them to build a blast furnace in the factory. However, it soon became evident that additional workers were needed to man the furnace. As a result, it became necessary to allow migrant workers, such as players, inside the factory to work the furnace.

Retrieved from "https://runescape.fandom.com/wiki/Factory_Manager?oldid=24563042"
Community content is available under CC-BY-SA unless otherwise noted.