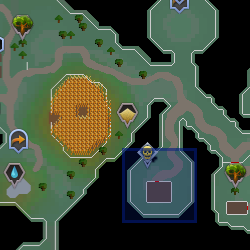 The Fairy Godfather is the ruler of Zanaris while the Fairy Queen is absent. He is also the leader of the Fairy Mafia, serving as the main antagonist of the Fairy Tale quest series. He is trying to replace the fairies with orks and the Fairy Queen with himself. He has two henchmen, Slim Louie and Fat Rocco. He is part of the quests Fairy Tale Part I, Fairy Tale Part II, and Fairytale III - Battle at Orks Rift. During Fairytale II, he gives you permission to use the fairy rings. During the battle in Fairytale III - Battle at Orks Rift he has a very low attack speed (85) thus attacking the player rarely.

After he leads his army of orks into Zanaris at the end of Fairy Tale Part II, he is soon met by the Fairy Resistance, who foil his plans via the use of tooth magic. He is last seen being sucked into the rift he created into the ork realm, cursing Zanaris and the tooth creatures, transforming them into ivory orks and leaving a huge impact crater at the site of the rift.

Retrieved from "https://runescape.fandom.com/wiki/Fairy_Godfather?oldid=24562184"
Community content is available under CC-BY-SA unless otherwise noted.