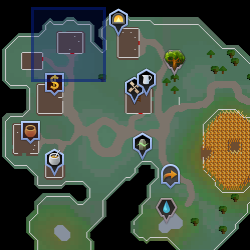 Fairy Nuff is a fairy who studies medicine in Zanaris, found in her house north of the bank. She graduated from PoxStead College over 200 years ago, and apparently studied advanced healing under Dr Foster while there. Her job is to take care of sick and wounded fairies in Zanaris, although as they are a magical race and don't get hurt very often, she claims to often not have much to do.

Prior to starting Fairytale I, she will offer to heal some of the player's life points in exchange for cut gems. She will heal 40 life points for an opal, 50 life points for a sapphire or a jade, 70 life points for an emerald or red topaz, 90 for a ruby and 110 for a diamond. Because of the expensive price on such a small amount of healing and the fact that there is a bank next door to heal completely, using her to recover health is not recommended.

She is involved in Fairytale I - Growing Pains and Fairytale II - Cure a Queen, and after a certain point during Fairytale II, she moves to the Fairy Resistance Hideout. After Fairytale III - Battle at Orks Rift, she will return home.

Retrieved from "https://runescape.fandom.com/wiki/Fairy_Nuff?oldid=24562314"
Community content is available under CC-BY-SA unless otherwise noted.