Fairy Tale II - Cure a Queen is the penultimate instalment in the fairy quest series and revolves around the Fairy Godfather. The objective of the quest is to finally cure the Fairy Queen and prepare the retaliation against the Fairy Mafia.

The Fairy Queen should be awake and back in charge of the Lost City by now, but what is happening in Zanaris? Why hasn't the Fairy Godfather abdicated the throne?

What is happening to all the fairy inhabitants and where has Fairy Nuff gone? Can you rise to the challenge of using the fairy rings to search the other planes and Cure a Queen, in the second part of the Fairy Tale trilogy?

To start, talk to Martin the Master Gardener in the Draynor Market. He will tell you to come back once his crops are grown, so wait until your quest menu says his crops have had plenty of time to grow; this takes around 5 minutes. Attempting to pickpocket Martin may further your wait.

Talk to him again and he informs you rather crossly that there is something still wrong with the crops, disbelieving your story about fairies and accusing you of creating this problem. Agree to investigate.

Go to Zanaris, and head toward the bank. Just north of the bank is Fairy Nuff's grotto. Walk in, and you'll see a short cutscene. Underneath one of the potion shelves is Fairy Nuff's certificate; pick it up. Studying the certificate turns up its back, which is covered with strange fairy symbols.

Use the certificate with the Fairy chef, south of the bank. She will tell you that she's seen similar inscriptions on a sign near the mysterious ruins, that is the cosmic altar, in southern Zanaris.

Head to the "mysterious ruins" leading to the cosmic altar and search south of it for a small stone tablet. It is a rune temple sign, with symbols similar to those on the back of the certificate. The sign reads: Cosmic Rune Altar. You can now decode Fairy Nuff's message by matching the symbols with the given key. Although you do not need to manually decode it, you must read the tablet to proceed. The back of the certificate reads:

Talk to the Fairy Godfather, in the room directly south of the Zanaris entrance. Tell him that the queen is missing, to which he visibly starts panicking and rushes to say that he will create a search party for her. The Godfather gives you permission to use the fairy rings to 'help' you locate the queen. He asks you to speak to the co-ordinator outside the room to learn more about the rings.

After talking to the co-ordinator and being informed of the vast history of the fairy rings and the queen, head south-west to the fountains, where you should see a fairy ring. Talk to Fairy Fixit there, and then try and use the fairy rings while wielding a dramen staff or lunar staff.

You may now use the fairy rings throughout RuneScape without finishing the quest, if you'd prefer. See our fairy rings guide for all the possible combinations.

With Nuff's certificate in your inventory, use the fairy ring four times in sequence, always returning back to Zanaris before using the next one. (For 1, 2 and 4 you can use the fairy ring autodialler to the locations mentioned in parentheses. Destination 3 must be manually dialled.)

If you end up on an island with some penguins, you either made a mistake entering the codes, are not holding the certificate, did not complete the step of finding the plaque at the ruins, or you do not have the required levels to continue with the quest.

You should be in the fairy queen's new location. Just go up the path, and head to the north-eastern room. Talk to fairy Nuff who, along with fairy Very Wise, informs you that the Queen is not well because the Godfather has hurt her by not returning her magic secateurs. As her essence is drained, she cannot retaliate without obtaining the secateurs, which you accept to bring back.

Head back to Zanaris, and pickpocket the Fairy Godfather. If you fail, you will be teleported outside Zanaris, so try pickpocketing from behind or the side, and make sure neither of his henchmen are looking directly at you. You should get a golden queen's secateurs. Also, at this point, you will see orks patrolling Zanaris.

You won't be able to travel back to the hideout by using AJS, but the steps will be saved in your travel log. Therefore, if you've kept Nuff's Certificate with you, you may simply select "Fairy Resistance HQ" from the travel log and press "teleport" to take you there, without having to travel to all the other three locations again. If you bank Nuff's certificate, the travel log will make you go through all the steps again.

The travel log might also be reset by using the fairy rings to other locations, by logging out or simply over time. The good thing is if you have travelled to the hideout once, you will have the record near the bottom of the log and can use that for travelling to each step. As you complete steps, the highlighted code in the hideout sequence will show you where you will go next.

Back at the fairy hideout, talk to fairy Nuff and give her the secateurs. She will use them to rejuvenate the queen, but they do not work completely. Nuff tells you that she needs a certain magic essence potion to replenish the queen's missing life energy. To make the potion, you need to collect some starflowers and crushed gorak claw.

The potion must be created when Fairy Nuff prompts you to, as any potion created beforehand will not work.

Return to the fairy ring in Zanaris and use the code CKP, which transports you to a cosmic plane. Move around for about 2 minutes whilst the starflowers grow. You can pass the time by talking to the cosmic being who lives there, contemplating the mysteries of the universe.

When it's ready, pick a starflower and add your harvest to the vial of water.

Return to Zanaris, and withdraw any armour and weapons, along with around 10 pieces of good food. Protection prayers do not work against goraks, but you may use boosting prayers. The goraks' attacks are accurate, therefore it is advised to wear good melee armour. Also, they have very low defence.

At the Zanaris fairy ring, use the sequence DIR to get to another plane full of goraks. They are level 74 and occasionally drain stat points. Kill them, eating food when necessary, until you get a gorak claw. Grind the claw with a pestle and mortar to get gorak claw powder.

The map of the Gorak plane

An overhead view of the plane
Click an image to enlarge

Mix the starflower and crushed claw into a vial of water to make a magic essence potion.

Back at the hideout, first talk to Fairy Nuff, informing her that you have made the potion. Fairy Nuff asks you to give the potion to the Fairy Queen. Use a dose of the magic essence potion on the queen, who finally regains her senses. As the queen angrily prepares to return to Zanaris and take back her throne, fairy Very Wise and fairy Nuff remind her that the Godfather has thugs and orks at his disposal, compared to her small band of loyalists, many of whom are injured. Her Majesty sees the flaw in the plan, and accepts the advice. The Fairy Godfather will continue to rule Zanaris — for now. Talk to the queen to end the quest. 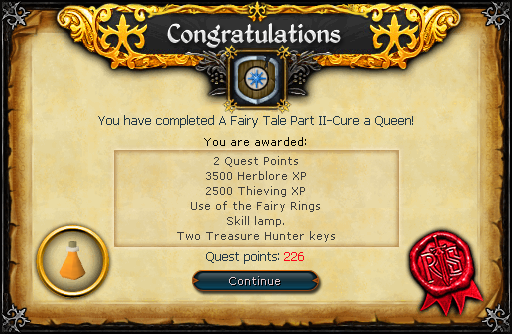 Completion of Fairy Tale II - Cure a Queen is required for the following:

Retrieved from "https://runescape.fandom.com/wiki/Fairy_Tale_II_-_Cure_a_Queen?oldid=24308457"
Community content is available under CC-BY-SA unless otherwise noted.