Fairy rings are a transportation system that is unlocked after starting the Fairy Tale II - Cure a Queen quest and getting permission from the Fairy Godfather. They consist of 50 teleportation rings spread across the land and provides a relatively fast means of accessing often remote sites in RuneScape, as well as providing easy access to other realms.

Players can enter the fairy rings from any node while wielding either a Dramen staff or a Lunar staff. If Fairy Tale III - Orks Rift is completed, no staff of any kind is needed. From there, using three letter codes, they can teleport to most rings within the system. Several rings, however, require players to complete quests before they can be accessed. If the selected code has no corresponding fairy ring, players will be teleported a few squares from the main ring. Inventors can manufacture a portable fairy ring, allowing remote access to the network.

Currently, there are 50 working fairy ring codes out of a total possible 64 codes, and in addition, 3 locations requiring multiple codes.

Completing Fairy Tale I - Growing Pains and partial completion of Fairy Tale II - Cure a Queen are required to access the fairy rings.

Guthix created World Gates to stabilise the wounds in the dimensional fabric created by The Blade. One such gate was placed upon Zanaris, however it was for unknown reasons prone to instability. Upon Guthix's return, he discovered that the fairies had turned it into a network of fairy rings. The name of their creator has been "lost to history".[1]

To use the fairy rings, players must complete the following quests:

One may quickly access the fairy rings in any of the following ways:

When using fairy rings in RuneScape, the inventory interface is replaced by a list of combinations that the player has previously accessed.

Entering an invalid code, or a code whose requirements you do not meet, will cause you to be teleported a few spaces away from the main fairy ring.

Due to an update on 9 September 2009, once you have visited a location once, you can click on its code in the log at the bottom right of your screen. Previously, you would have to re-enter the code every time. The sort order of the list can be changed using the right-click menu on the icon at the top right of the panel - it can be sorted by location or code. A quick way to navigate to often-visited places is to remember the location of the slider on the side of the log, e.g.: Piscatoris - the slider is in the middle, northwest of Yanille, the slider is just above centre, etc.

Due to a second update on 13 May 2010, the fairy network was expanded to include Ape Atoll, Mos Le'Harmless, a cave under the Feldip Hills, a new area of Zanaris, and the Orks Rift.

When you teleport to a fairy ring, you appear in the centre of the ring. At this time you are sometimes but not always safe from attack by monsters using melee (and perhaps from ranging, magic, and dragonbreath, too, but this is unconfirmed). Most monsters will ignore you if you do not move once you appear, including high-level monsters like goraks. However, some monsters will attack with melee as soon as you appear. Vampyres in the Haunted Woods (ring ALQ) and their neighbours, the ghasts in the Mort Myre Swamp (ring BKR) are known to do this, as well as the Wolves (rings DJR and CJR) near the Sinclair Mansion and the Jungle Spiders east of Yanille (ring CLS).

In all cases, once you leave the centre of the ring, you can be attacked. Also, if you attack a creature while in the centre of ring, it will retaliate.

When the fairy ring transportation system was released, there were only 34 fairy rings. 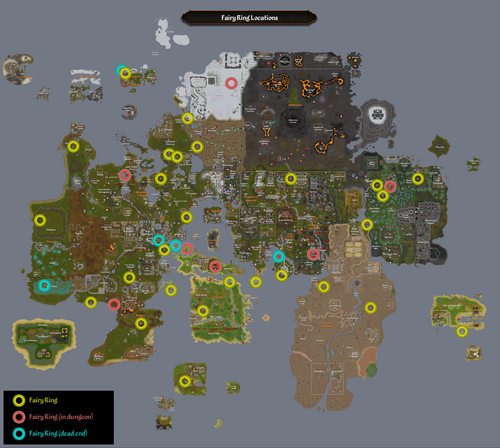 Retrieved from "https://runescape.fandom.com/wiki/Fairy_rings?oldid=26852586"
Community content is available under CC-BY-SA unless otherwise noted.