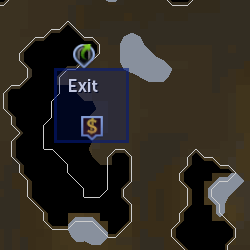 Farli is a dwarven explorer who was first to discover the Living Rock Caverns, and has set up camp there with a pulley lift that acts as a deposit box for ore and loot.

Farli is extremely matter-of-fact and fails to recognise sarcasm or subtlety in conversation. As an example, if the player asks him about the caverns he will simply reply that "it's a cave" without going into any detail, at which point the player character sarcastically thanks him for the lack of information and he simply says, "You're welcome!"

Retrieved from "https://runescape.fandom.com/wiki/Farli?oldid=24563895"
Community content is available under CC-BY-SA unless otherwise noted.