View source
watch 02:52
Roblox: DeepWoken - The Loop
Do you like this video?
Play Sound
OS
This article is about the Farming skill. For information on training Farming, see Farming training.
Not to be confused with Player-owned farm.

Farming is a members' gathering skill, through which players grow crops by planting seeds at Farming patches. Different types of seeds can be planted at corresponding types of Farming patches, which are found throughout RuneScape. Before a Farming patch can be used, players must often clear away any weeds that have grown in it with a rake, which can be placed on the tool belt or used from the inventory. Weeds will grow in any Farming patch that does not have a crop planted in it, unless the player has requested that their Farming patches be kept weed free after unlocking the ability to do this by completing the Fairytale III - Orks Rift quest.

After being planted, crops will grow in real time; it is not necessary to be logged in or to remain at Farming patches for crops to grow, so players may carry out other in-game activities after planting their crops. If a player with a Farming level of less than 15 stands idly by a Farming patch for an extended period of time, they will be reminded by the Farming patch spirit that they can leave their crops unattended. After a period of time, if they have not become diseased and died during the course of their growth, crops will become fully grown. Players can check the health of the crops to gain Farming experience and/or harvest from them to obtain produce.

Rapid Growth spell enables a growth stage to be skipped for trees, fruit trees, and herbs. It can only be cast once per day per patch. This spell cannot be cast on a diseased patch.

The first growth tick occurs 500 game ticks after the player logs in or logs out. Growth ticks are reset when either action occurs, meaning that nothing can grow five minutes after a player logs in or logs out. This may cause players who are constantly switching worlds to miss growth stage windows due to resetting the growth tick timer. Many other Farming actions occur with growth ticks. These include weeds and wood and fruit tree seedlings. These grow at any growth tick, so they may be treated as running on a growth stage window with a cycle period of 5 minutes.

The size of the harvest from a patch is determined either by chance or by the type of patch. Fruit trees, bushes, and flowers have set harvests. Herb and allotment patches have harvest sizes determined by chance, based on a life points system.

Each herb and allotment patch starts with 3 lives and an additional +1 life with compost, +2 with supercompost, +3 with ultracompost. Every harvesting action will decrease the number of lives by 1 unless it is saved, with the patch becoming empty when it runs out of lives. This chance is dependent on Farming level. Theoretically, there is no upper limit on the size of a harvest, but it is exceedingly rare to get very large harvests. The chance to save a life when harvesting is increased by Farming level.

The chance to save a harvest life on herb patches is approximately determined as follows:

Magic secateurs must be wielded or on the tool belt to affect the save life chance. Notably, the chance depends only on Farming level and is independent of the herb planted. The chance is highest at 99 Farming, where it reaches 36%. The expected actions can be calculated below.

Diseased herb, flower, allotment, hops, belladonna, cactus, mushroom, and jade vine patches can be treated with plant cure to restore the crop to health. Diseased trees and bushes can be restored by pruning them with secateurs. Players who have access to Lunar spells may alternatively use the Cure Plant spell to treat diseased plants. The Remote Farm Lunar spell, which is unlocked as a reward from playing Livid Farm, can be used to view plants' status as well as to cure any diseased Farming patch. An amulet of farming or amulet of nature can be attuned to a specific Farming patch and will alert the player if a plant growing in the patch becomes diseased. Both amulets may also be rubbed to check whether or not a plant is still healthy. The amulet of nature offers players a teleport to its attuned patch if the patch becomes diseased. 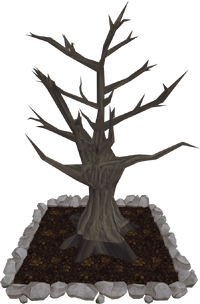 Treating a Farming patch with a bucket of compost, supercompost or ultracompost before or soon after planting a crop reduces the chance of it becoming diseased during all growth cycles. The Fertile Soil spell can also be used to treat a patch with supercompost. Watering allotment, flower, and hops patches with a watering can prevents the risk of disease occurring at the end of that growth cycle. During the next growth cycle, the plant goes from being watered back to normal and is at risk of becoming diseased unless it is watered again.

To prevent death entirely players can pay the gardeners found at cactus, tree, fruit tree, bush, allotment, hop, spirit tree, jade vine, calquat tree and elder tree patches to prevent plants growing in these patches from dying. The payments required are typically produce from crops and are different for each type of plant. Payment is required each time that the player plants a new plant in a patch. Noted payments are accepted. It is not possible to protect belladonna or mushroom patches in this way, as gardeners are not present at these locations. Additionally, gardeners cannot be paid to take care of herb or flower patches. The evil turnip patch and special herb patch at Trollheim are immune from disease, as are poison ivy bushes. The mushroom patch at Canifis will not become diseased if the player has completed the medium set of Morytania achievements. Similarly, the herb patch in the wilderness becomes immune to disease upon completion of the hard set of Wilderness achievements.

The tools required for Farming may be purchased at Farming shops or from the Grand Exchange.

There are four allotments in RuneScape: south of Falador, north of Catherby, north-east of Ardougne and north-east of Canifis. Each full allotment patch contains:

Wielding a Falador shield 2 or better while farming the Farming patches at the allotment south of Falador gives 10% additional Farming experience.

A single flower seed is needed to plant in a flower patch. Most flowers yield 1 flower when harvested; this clears the patch. There is an additional flower patch in the Wilderness that may only be used to grow limpwurts.

A herb seed can be planted in a herb patch. Harvests range between 3 and 18 grimy herbs. Using supercompost and magic secateurs a player will gain an average of 7.81 grimy herbs when harvesting a herb patch, with a minimum of 5 grimy herbs. The juju farming potion gives players a 1/3 chance to harvest two herbs in one action, and the greenfingers aura gives additional chance, up to 15% for legendary greenfingers aura. Using both a juju farming potion and legendary greenfingers aura, a player can expect 11.59 herbs per patch. All herb patches start with 3 harvest lives, increased to 4 with compost and 5 with supercompost. This represents the minimum harvest. An additional herb patch is located in the Crwys district of Prifddinas. After completing My Arm's Big Adventure players can use the special herb patch, which never becomes diseased, at Trollheim. The Wilderness herb patch is the only patch where bloodweed seeds can be planted, and becomes immune to disease after completion of the Hard Wilderness achievements.

There are four hops patches: north of Lumbridge, north of McGrubor's Wood, Yanille and Entrana. 4 hop seeds, or 3 jute seeds, are needed to plant in each hops patch. Harvests will be a minimum of 3 hops. After a hops patch has been harvested it will be cleared for re-planting.

There are 5 bush patches: west of the Champions' Guild, Rimmington, south of Ardougne, south-west of Etceteria and in the Crwys district of Prifddinas. One bush seed is needed to plant a bush. All bushes except poison ivy are susceptible to disease. When fully grown, the player can check the health of the bush and then harvest berries or other produce as explained below in the table. Unless a bush is dug up it will continue to regrow berries over time, though the player can only check the health of the bushes once. Exceptions to this are barberry bushes and wishing well bushes, which do not re-grow their produce once harvested.

There are 6 tree patches: at Lumbridge, Varrock Castle, Falador Park, Taverley, Gnome Stronghold and in the Trahaearn district of Prifddinas. As with fruit tree, calquat tree, and elder tree seeds, before a tree seed can be planted it must be used on a plant pot filled with soil to create a seedling. The seedling then needs to be watered. After a few minutes, the seedling will turn into a sapling, which can be planted in a tree patch.

A fully grown tree acts similarly to the trees that are used in the Woodcutting skill. After checking a tree's health players can cut it down using a hatchet to receive logs. As with non-player grown trees, there is a chance of a farmed tree dropping bird's nests. Once a tree is cut down it will leave a tree stump, which be left to respawn or dug up to gain tree roots and to clear the patch. Players who do not wish to cut down and dig up a tree can use the right-click “clear” option on the tree to instantly remove it. Gardeners can also instantly remove a tree if they are paid 200. There are some differences between player grown trees and non-player grown trees:

There are 7 fruit tree patches: at Gnome Stronghold, east of Catherby, west of Tree Gnome Village, Brimhaven, Lletya, Herblore Habitat and in the Meilyr clan district of Prifddinas. As with tree, calquat tree, and elder tree seeds, before a fruit tree seed can be planted it must be used on a plant pot filled with soil to create a seedling. The seedling then needs to be watered. After a few minutes, the seedling will turn into a sapling, which can be planted in a tree patch. Once a fruit tree is fully grown the player may check its health and harvest it to receive 6 fruit. A fruit tree will continue to grow fruit over time, unless it is cut down and its stump dug up, with a new fruit regenerating every 45 minutes.

There is a cactus patch in Al Kharid, and another in Menaphos. Cacti grown here will regenerate their produce over time, creating a new crop every 20 minutes. After completion of the hard set of Desert achievements the cactus patch will no longer get diseased and will give double cactus spines and potato cactus when harvesting from a cactus or potato cactus.

The following plants may only be grown in their specific patches:

Players can use their Farming skill to plant at the patches within Herblore Habitat. This contains patches for growing vine blossoms, vine herbs and vine bushes as well as a regular fruit tree patch.

At level 86 Farming, players can grow and cross-pollinate berries in the berry planter on the island of Tuai Leit. The following berries can be grown:

No Farming boost is stackable with another as of present. Only the highest boost works unless it is a negative boost from Spicy Stew.

Players may also consider that squashing a Grand seed pod will have a temporary lowering effect to Farming by 5 levels. The reason given in the dialogue box is "Plants seem hostile to you for killing seeds from the Grand Tree."

Like all skills, there is a skilling pet obtainable from training this skill. The pet for the Farming skill is called Brains.