An expert on Pizzas. Both making and eating. 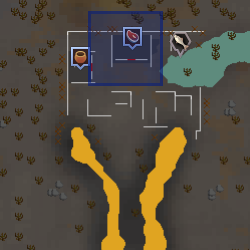 Fat Tony is an outlaw cook that can be found operating his store named Tony's Pizza Bases at the Wilderness Bandit Camp, selling pizza bases for 4 coins each. His previous job was a royal cook in Misthalin, but he claims to have been banished by the king after giving him food poisoning, although it was merely a case of misunderstanding as the king was drunk.

He now spends the rest of his time making pizzas for the bandits. However, the bandits, eating only to satiate their hunger, do not appreciate his gourmet cooking. In order to access his shop, the player must be skulled.

His shop also conveniently contains a cheese and a tomato respawn and a stove, allowing players to easily make pizzas. Making an anchovy pizza from scratch and using it on him whilst remaining in the Bandit Camp is a medium Wilderness Task.

Retrieved from "https://runescape.fandom.com/wiki/Fat_Tony?oldid=24563172"
Community content is available under CC-BY-SA unless otherwise noted.