Fate of the Gods is a grandmaster quest that was released on 24 March, 2014. It is the conclusion of the Return of Zaros series that started with The Dig Site in 2003. The quest will feature Zaros' return and the player will be required to help him find a new host body. Choices about Zaros' background story, the Dragon Riders and the Elder Gods. The World Gate will also play a key role.[1]

While Missing, Presumed Death is the only actual quest requirement, completion of Ritual of the Mahjarrat is the beginning of a series of Sixth Age content in which Zaros will feature heavily. For this reason, the content developers chose to give Fate of the Gods low quest requirements, instead of locking it behind other Zaros-related quests such as The Temple at Sennisten.[2]

This section does not have to be completed if you powered up the World Gate after Mahjarrat Memories.

Speak to Azzanadra, south of the Eagle's Peak lodestone (close to the Meeting/Making History startpoint), who will inform you of the return of Zaros. Accept the quest and equip a ring of visibility to see the World Gate. Upon speaking to Azzanadra again, he will tell you that he, together with Zaros, has enlisted the help of Sliske to pull the World Gate out of the Shadow Realm. Sliske will pull you into the Shadow Realm and offer you a proposal before telling you how to fix the World Gate.

Click the right console until you see this rune:

Click the left console until you see this rune:

Click the right console until you see this rune:

When you enter this un-familiar world of Freneskae, you will need to move fast. There are dangerous hazards that will hinder your journey through this realm.

Remember to eat food regularly. Also, there are several places where you can stand which negates damage, and can heal too. Look out for these as you journey through Freneskae, as you are guided/followed by a mysterious entity. You should collect Memorium Crystals along the way in order to unlock memories inside the cavern area of Freneskae.

Once you reach the cave entrance, step inside.

Your progress is saved after each area.

In the middle of the room, there is an area where you can deposit Memorium Crystals. Each crystal that you deposit will unlock a memory, which you can refrain from doing unless you want to know more about the lore of the quest and Freneskae. Some crystals may only be acquired after you complete the quest and return to Freneskae, so don't worry if you don't have all of them at this point.

At the other end of the cave is a door with symbols on it. There are three stages to this puzzle, with the last being the hardest. The aim is to match up the symbols together to light up the lines which are inbetween the dials. Once all lines are lit up, the next stage will begin. After completing all of the three stages of this puzzle, you will be able to proceed.

Upon entering the next room, four Nihils will appear. Each is based on elements from ancient magicks. They emerge at random from the twelve doorways and will charge in one direction. Making contact with one of them while they are running will cause heavy damage. Attacking them will shift their attention to you. Each Nihil uses a different combat style, and has a special attack (which is signaled by them hissing beforehand) as follows:

Once you've entered the next area, a lengthy conversation with Zaros will begin where you will be able to ask him questions about him, his history and more. Once this is finished, you will need to defend against Mah's nightmare.

Warning: Portents of Restoration do not appear to work while defending against Mah's nightmare.

The nightmare will last a couple of minutes where you must defend against muspahs. Your progress is displayed at the top of your screen in order to help you keep track of how long you have got left. Prayer and food is especially useful in this part. Once it hits 0%, all of the muspahs will die and you are free to climb down the summit. If you agreed to let Zaros into your body he will give you unlimited prayer point for Ancient curses and Unlimted runes for Ancient Magicks.

You will enter a large area with several Mah wisps. You should begin to collect divine energy from these. Also, pick up The Measure on the ground. This will allow you to see hidden Mah wisps, and collect divine energy from fainter wisps and make things a whole lot easier. Once you get 250 Mah energy, weave a dark divine simulacrum (to help Zaros) or a light divine simulacrum (to hinder Zaros).

Once you've made it, climb back up the summit and return to Zaros.

The Return of Zaros

When you speak to him, he will request your chosen simulacrum. Bare in mind that whichever simulacrum you chose will change his appearance. But, without warning, Mah awakens and you are teleported away to a different part of the realm. Step through the world gate and return to Azzandara, who will give you the option to witness the return of Zaros. A cutscene will occur where Zaros orders his followers to different tasks, while banishing Sliske.

Zaros will proceed to give you a Shard of Zaros, which will make people in RuneScape aware of your affiliation with him, and the quest will finish. 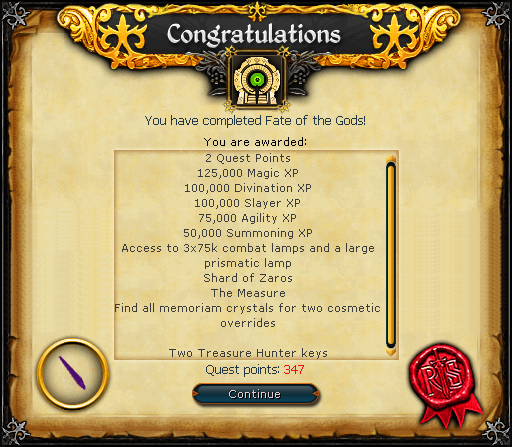 Retrieved from "https://runescape.fandom.com/wiki/Fate_of_the_Gods?oldid=24308246"
Community content is available under CC-BY-SA unless otherwise noted.