A religious man... And occasional drunk. 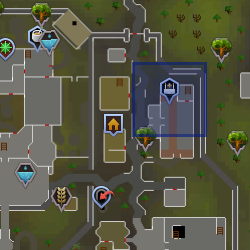 Father Lawrence Lambare is a Saradominist priest who worships in his Church in north-east Varrock, which he is in charge of. He is often drunk when talked to and also claims that he is holding a congregation, although both of his parishioners are asleep in their seats, suggesting that his sermons are dull. He used to be a close friend to Romeo and he knew a lot about the struggles between Romeo's and Juliet's families. He is also a good friend of Sir Theodore's and offered him counsel on several occasions during his stay in Varrock. He is also held in high regard by the King's court and is often asked to perform last rites by the nobility.

Father Lawrence was the person who suggested that the player could make a cadava potion during the Romeo & Juliet quest to help Romeo marry the love of his life, Juliet. However, Romeo & Juliet was replaced by Gunnar's Ground on 21 September 2010.

During Dimension of Disaster: Curse of Arrav, he is used to obtain sacred oil, by proving to him that Saradomin can hear his prayers.

Retrieved from "https://runescape.fandom.com/wiki/Father_Lawrence?oldid=23256334"
Community content is available under CC-BY-SA unless otherwise noted.