The Restless Ghost
Buyers and Cellars 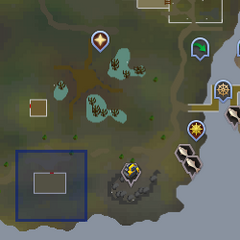 Father Urhney is an irritable priest who lives as a hermit in the Lumbridge Swamp. He has left Lumbridge to perform a full two-years meditation and retreat. Father Urhney plays a role in The Restless Ghost Quest, giving the player an Amulet of Ghostspeak, which is required to speak to the Restless Ghost in Lumbridge. If the player loses the Amulet of Ghostspeak, even after the quest is done, he will provide the player with a new amulet. Father Uhrney also happens to be a well-known exorcist. Father Urhney never stops meditating. He explains this in an issue of Postbag from the Hedge, saying he has to start his two years of solitude over again if spoken to.

During the Buyers and Cellars quest the player has to steal a chalice from Father Uhrney, by means of pickpocketing the key for the display case from him then taking the chalice from the case.

Retrieved from "https://runescape.fandom.com/wiki/Father_Urhney?oldid=10933316"
Community content is available under CC-BY-SA unless otherwise noted.