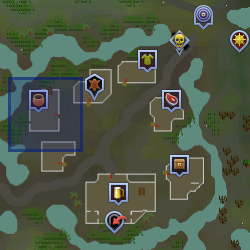 Fidelio is the owner of the general store in Canifis. Like many of the residents of Canifis, he is a werewolf, but is not aggressive to the player. He claims that the items he sells are "rare human artefacts", which is why he charges higher then other general stores.

According to Roavar, while Fidelio was young, he was often a daredevil, which resulted in him entering the human lands to smuggle items back into Canifis. As a result of this smuggling operation, his nerves exploded and is the reason why he speaks with a stutter.

Retrieved from "https://runescape.fandom.com/wiki/Fidelio?oldid=24564069"
Community content is available under CC-BY-SA unless otherwise noted.