RSCOS
This article is about the location. For the quest, see Fight Arena.

The Fight Arena is a large structure south of Ardougne. It is here that General Khazard forces captured creatures and people (called fight slaves) to fight in violent clashes that always result in death. Some of these creatures were most likely imported by ship through Port Khazard from other regions. These battles are similar to gladiator battles from Roman history.

The Fight Arena plays a large role in the quest Fight Arena. The only useful facilities that can be found here are the 4 water supplies and the bar to the west. Khazard armour can be obtained here by searching the armoury in the northeastern house. Other than this, the area has no other use and cannot be accessed again after completing the quest. If attempted, the doorman will say "You're him/her! The one who beat the General/General's Pet! Begone, murderer!".

The Arena itself is a large fenced in area, connected to a building that houses the fight slaves. The arena is also connected to three cages, which house the arenas monsters, a Khazard scorpion, a Khazard ogre, and Bouncer. General Khazard himself can be found in his office upstairs, in addition to watching the fights at the entrance to the arena.

The area around the arena itself mainly consists of the homes of the Khazard Guards, although it does contain various other buildings of interest too.

Main article: Fight Arena Bar
The Fight Arena Bar is a small bar run by Angor that serves beer and is notable for being the only place to serve the famous Khali brew. It mainly serves the Khazard Guards and people coming to watch the fights in the arena.

The Laundret does the laundry for the Khazard Guards, and features in the While Guthix Sleeps quest, where players have to obtain some of Movarios laundry from the Khazard launderer.

The Armoury is where the Khazard Guards obtain their armour. It is used in the Fight Arena quest, players have to steal some armour from it in order to get into the Fight Arena.

Port Khazard is a small port run by General Khazard that seems to serve as a quick way to get to the arena by sea. 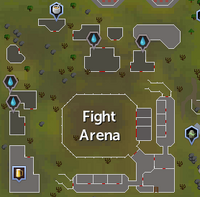 A map of the area.

The western part of the area.

The houses in the northern part.
Click an image to enlarge
Retrieved from "https://runescape.fandom.com/wiki/Fight_Arena_(location)?oldid=19165263"
Community content is available under CC-BY-SA unless otherwise noted.