The fire lycan is a legendary pet released as a promotional item that is redeemable by players who have a code from the September 2017 UK edition of PC Gamer, or are "Legendary" members of the PC Gamer Club.

Like all pets and summoning familiars, it cannot enter or use its abilities in certain areas.

A Fire Lycan Baby performing the "Can't pet this" emote.

A Fire Lycan Adolescent performing the "Fetch!" emote.
Click an image to enlarge

A Fire Lycan Adult performing the "Dog-eat-goblin" emote.
Click an image to enlarge 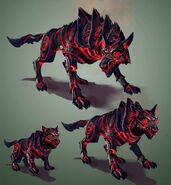 Retrieved from "https://runescape.fandom.com/wiki/Fire_Lycan?oldid=25382782"
Community content is available under CC-BY-SA unless otherwise noted.