View source
watch 02:56
Raise a Floppa - The Loop
Do you like this video?
Play Sound
RSCOS
For the variant encountered in Daemonheim, see Fire giant (Dungeoneering).
Defined properties:

Fire giants are the second strongest giants in RuneScape and they are well known for their good combat and Slayer experience, and their high gold charm drop rate. Like all giants, they have high life points but low defence for their combat level.

The Waterfall Dungeon requires the player to complete a large portion of the Waterfall Quest to access the area. After the quest, Glarial's amulet and a rope will always be needed to enter the dungeon, reducing the player's inventory space, however a Hoardstalker ring could be used for faster travel, as well as saving one inventory space. The dungeon contains two rooms with many fire giant spawns, and it is rather cramped for better training. 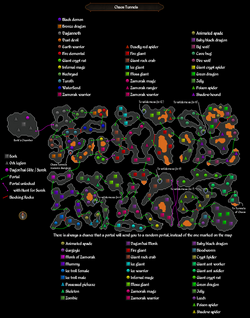 Fire giants can be found in three rooms inside the Chaos Tunnels. They are more convenient to get to than the giants in the waterfall.

While the tunnels do not have the effect of being in the Wilderness, all but the most remote entrance to the tunnels are located within the Wilderness, so players must choose to either risk player killers or take a very long walk. The non-wilderness route, safe from player killers, is located under the statue just south of the sawmill in Varrock, leading through the Dagon'hai area and most of the chaos tunnels. Completion of What Lies Below is required to use this route and completion of the Hunt for Surok subquest is useful, allowing all portals in the tunnels to be usable. The various recommended rooms located in the tunnels are as follows:

The Smoke Dungeon from the Desert Treasure quest has a number of fire giants, and is usually empty of players. There are 4 fire giants located in the large central chamber at the corners of the room, along with others scattered throughout the dungeon. Players accessing the dungeon through the passage from Pollnivneach Slayer Dungeon will find two clusters of them to the north. This Dungeon requires the player to wear either a face mask, Gas mask, Masked earmuffs, or slayer helm. Without a mask item the player's health will drop very quickly due to smoke inhalation; an environmental hazard present within the dungeon which rapidly hits for around 200 life points. The smoke itself cannot kill, but it can lower life points enough to make entering combat risky.

There are a number of fire giants in the Brimhaven Dungeon, which requires a toll of 875gp per trip (exempt from toll if a player has ever acquired the Karamja Gloves 3) to access. These giants are now a good option for both training and slayer, as the wild dogs are unaggressive to players who are over combat level 71. Using the Brimhaven Dungeon can be a convenient method of banking the drops of the fire giants: Teleport to Ardougne or Ardougne cape, House Teleport (Chipped) or boat from the Ardougne docks, repeat. The easiest way to get there would be by using the Karamja lodestone, which is just east of the dungeon.

The Deep Wilderness Dungeon, slightly southeast of the Wilderness agility course, contains 6 fire giants at the very end of the dungeon. Remember that this location is extremely dangerous as you are still in high-level Wilderness and may be killed by players at any time.

Fire giants use Ranged and melee attacks to fight, and have no special abilities or attacks. Their Smoke Dungeon habitat, however, deals rapid damage to unprotected players, so players wishing to kill them there should wear protective face gear; a face mask, masked earmuffs, or any slayer helm variant. Any of these will block the environmental damage.

Fire giants are weak to slash weapons. This means the most effective weapons to use on them are dual-wielded drygore longswords, chaotic longswords, chaotic claws, or an abyssal vine whip with an enhanced excalibur. An Armadyl godsword in passive mode is also effective, as it boosts the player's attack and strength. Additionally, a dwarf multicannon can be used in the waterfall dungeon, waterfall resource dungeon, Brimhaven dungeon and deep wilderness dungeon locations, for faster kills.

For players who struggle to kill fire giants without losing a lot of health, there are several methods that can be used to heal without bringing food along. Fire giants have an uncommon drop of cooked lobsters, which heal up to 1200 life points at a time. The Regenerate ability can be used to heal while out of combat, at the cost of adrenaline; it is recommended to use this when at 100% adrenaline. The Vampyrism aura, scrimshaw or superior scrimshaw of Vampyrism, the off-hand enhanced excalibur sword, or the Soul Split ancient curse can all be used to heal as damage is dealt to the fire giants. Guthan's equipment is not recommended for use in the Smoke Dungeon, but can be used in all the other locations to heal life points. The Bones to Peaches spell can be used to turn the fire giants' 100% big bone drop into healing peaches, if unlocked from the Mage Training Arena, or a bunyip Summoning familiar can be used to heal over time.

If players choose to use Soul Split, they should forego the use of Bones to Peaches, and should instead use a combination of the bonecrusher and demon horn or split dragontooth necklace Dungeoneering rewards to automatically restore Prayer points as they kill fire giants.

Players who have bought the Herbicide Dungeoneering reward are recommended to bring it to fire giants, as they commonly drop low level herbs. Players may also find a gem bag useful, if they wish to collect the uncut gems that fire giants drop.