View source
watch 01:54
Arcane: League of Legends - The Loop
Do you like this video?
Play Sound
RSCOSWP
[view] • [talk]

Fireplaces are interactive scenery items found inside many buildings in RuneScape. Some fireplaces (such as the one in the Sinclair Mansion) can be used like a regular fire to cook any meat or fish and carries the same burn rate.

While the fire in the fireplace remains always lit, it does not allow players to bake or cook food that requires a range such as bread, cakes, pies or pizzas, as it is counted as a normal fire.

Players can also build a clay fireplace, stone fireplace, or a marble fireplace in their homes using the Construction skill at levels 3, 33, and 63 respectively, and can light them with logs and a tinderbox. Using logs on these fireplaces grants Firemaking experience equivalent to normally burning the logs, but the fire lasts longer.

The fireplace in Falador Farm used to be able to be cooked on, but is now non-interactive and cannot be clicked on. Similar fireplaces can be found in the Gower farm and several unlit ones in houses in Rimmington. There are also a couple of fireplaces in Varrock that can be examined, but not cooked on. 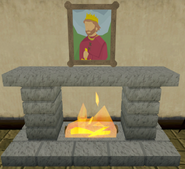 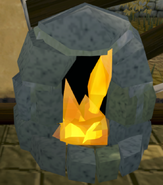 Unusable fireplace in a house in southeast Varrock. 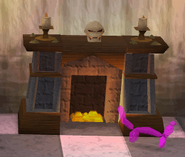 The fireplace in the Prison Pete event. 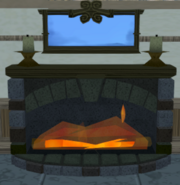 Usable fireplace inside the Sinclair Mansion.
Community content is available under CC-BY-SA unless otherwise noted.
Advertisement