Start a Wiki
OS
This article is about the one found on the island of Miscellania. For other fishermen, see Fisherman.

There's something fishy about him. 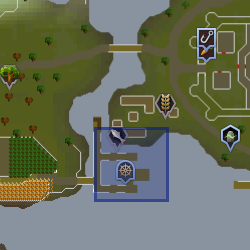 Fisherman Frodi is a citizen of Miscellania, located on the docks. During Throne of Miscellania, players need to gain his support; after the quest, players can help him, by catching fish for him, to gain favour. Each fish caught is instantly given to him without the need for the player to stop fishing or move (No open inventory slots are needed). The only exception are big swordfishes, which the player will keep. Fisherman Frodi is one of four residents whom players can assist to gain favour; the other three citizens players can assist are Gardener Gunnhild, Lumberjack Leif, and Miner Magnus.

Retrieved from "https://runescape.fandom.com/wiki/Fisherman_Frodi?oldid=24926932"
Community content is available under CC-BY-SA unless otherwise noted.