Start a Wiki
For the item, see Flint (Artisans Workshop). 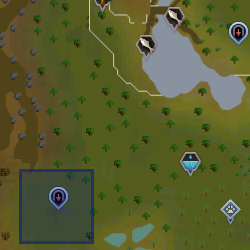 Flint is the eldest[1] of the roaming firemakers who unwittingly walk into Char's prison during The Firemaker's Curse. He is the adoptive father of Lina, who he found abandoned as an infant.[2] His influence led to her developing her own interest in fire.[3] He is an inventor, making items used in creating easier fires, such as the pitch can.[3][4] He has little skill in adventuring, being reliant upon a passing adventurer to help them survive their journey into Char's cave.[5] He has a troubled past, which he does not like bringing up.[6]

It is possible for Flint to be killed during The Firemaker's Curse if the person Char possesses is not tied up. Provided he survives, he'll appear in Balthazar Beauregard's Big Top Bonanza with the rest of the surviving firemakers. Regardless of his survival, there is a fire poi move named after him - the Flint Fling.

Retrieved from "https://runescape.fandom.com/wiki/Flint?oldid=24922745"
Community content is available under CC-BY-SA unless otherwise noted.