Start a Wiki
This article is about Rolo the Stout's subordinate. For the Sinclair family dog handler, see Pierre.

The sort of charmer that worries about getting his boots dirty while stepping over starving orphans. 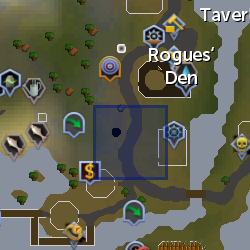 Foppish Pierre is a subordinate of Rolo the Stout. He is found in Taverley, just west of the watermill.

Pierre carries expensive spices, which the player steals from him to make a terrible pie into a mouth-watering pie during the Let Them Eat Pie quest. He is the one that the player takes the forged letter to in the quest in order to open the storehouses. He can be pickpocketed for 8 Thieving experience and a few coins if the player is not doing the quest.

After the quest Let Them Eat Pie, he is crying about how he will turn into a poor person. After the player talks with him, he makes an idea based on what the player said, by lowering his quality, firing people, and then selling the product at a high price. He then thanks the player, in an insulting yet complimenting way.

Retrieved from "https://runescape.fandom.com/wiki/Foppish_Pierre?oldid=24920905"
Community content is available under CC-BY-SA unless otherwise noted.