RuneScape Wiki
Register
Don't have an account?
Sign In
Advertisement
in: Master quests, Quests, Forgiveness of a Chaos Dwarf,
and 3 more
English

Forgiveness of a Chaos Dwarf

Forgiveness of a Chaos Dwarf is the third quest in the Rise of the Red Axe series and the first quest in the series developed by Mod John A. This is visible by some of the quest's themes: Veldaban's characterisation becomes more important, and the plot becomes darker as Hreidmar begins to execute his plans to take over Keldagrim.

It is recommended to read The Coat Thief before playing the quest to better understand some of the plot.

Missing person reports have been flooding in from Keldagrim East, but the Black Guard seem reluctant to do anything about it. Resources are stretched thin, but Keldagrim West is undoubtedly a greater priority for the Black Guard Supreme Commander. Veldaban refuses to subscribe to this opinion, but his hands are tied; can you help him to reveal the abductors' identities?

Talk to Commander Veldaban in the black guard building in the western part of Keldagrim. He will tell you the black guard commander isn't giving him any extra guards to investigate the disappearance of dwarves recently. Offer to help him. Upon trying to ask Commander Veldaban another question, a guard comes in and informs him that chaos dwarves have been spotted in the city and that Colonel Grenda is asking for assistance. After a short cut scene, you will be taken to the Keldagrim Watchtower on the outskirts of the city.

Commander Veldaban will ask Colonel Grenda about the situation. Colonel Grenda relates that a small force of chaos dwarves showed up. Her men trapped one of the chaos dwarves in the tower, but six of her men have been killed trying to face the dwarf. He seems to possess some kind of magical weapon. Commander Veldaban will offer to deal with the dwarf and asks you if you are ready to go with him. Accept and enter the tower and go up the stairs. Go up another set of stairs again to the second floor and you will find Veldaban fighting the chaos dwarf.

You have to kill a chaos dwarf hand cannoneer who uses a hand cannon. With a high combat level, this is not a difficult fight. The cannon fires very slowly (about the speed of a halberd), but can hit up to 1520. Using Protect from Missiles is strongly recommended as this will block the cannon's damage and force the dwarf to use a much weaker melee attack that only hits up to 476. A good strategy if you are lower combat is to let Veldaban engage the chaos dwarf for a bit, and join the fight when the dwarf is at half health. Another method is to turn on Protect from Missiles and use the stairs to safe spot him. If you die whilst fighting the dwarf, your gravestone will appear at the bottom of the tower.

With the package in your inventory, return to Keldagrim. Use the Mine cart system at the Grand Exchange trapdoor to do this faster.

Go to the Laughing Miner pub in Eastern Keldagrim to find Commander Veldaban sitting at a table. Talking will begin an interactive talking cut scene. Exhaust every option (including going back and talking about something else); eventually, he will ask you to ask the barmaid for a Guardsman's stout on his tab. When you ask the barmaid for a drink, she tells you that he has been in a lot lately, and that he used to go there with his lady friend but, she hasn't seen her in a while. Give him his drink which will start another talking cut scene. Ask him about his lady friend. Veldaban will say he hasn't been with anyone lately, especially not since the Battle of Barerdir. After asking him about the battle, he then asks you to take him back to the Black Guard HQ.

A cut scene ensues. Veldaban, still drunk, will call out Supreme Commander Bisi. Lieutenant Brae will come out, trying to stop Veldaban from doing anything rash, but Veldaban goes inside anyway. He argues drunkenly with the Supreme Commander for a bit then leaves to sleep off his drunkenness.

After the cut scene, head back to the south area of Western Keldagrim, passing through the watchtower where you fought the chaos dwarf cannoneer.

Open the package to remove the boot and place it in your inventory. Use the boot on the footprints located south of the watchtower to reveal a longer trail leading to the Keldagrim south-west mine. (Level 61 Hunter is required for this section of the quest. Temporary boosts do work. It is possible to do this at level 54 with a boost from the hunter pool in Oo'glog, then quickly teleport to the Grand Exchange, travel to Keldagrim by minecart, then run through the palace. Or teleport to the Fremennik Province lodestone, then head north-east, enter the cave and choose the cross-river option on the Dwarven Ferryman. 61 Hunter is only required to compare the boot to the footprints.) Follow the trail south, past the Dwarven Ferryman, then west across the bridge into an area with a mining icon on the minimap.

Retrieve the bowl from the package and use it on the fire in the mining cavern to put it out. Remove the bowl. (Level 61 Firemaking is required for this part; boosts are possible). Closer examination will reveal a socket at the bottom of the fire pit.

Take out the rod from the package then use it on the fire pit. Once in the pit, turn the rod. (Level 69 Strength is required for this part; boosts are possible).

A secret tunnel will open where a wall was to the west of the fire pit. Enter the tunnel. Continue heading west through the cavern and enter the doorway.

Try riding the cart (both hands should be free). After a short ride which returns you back to where you were, a message will appear suggesting the player go talk to Veldaban if he's awake. When leaving the cave, there will be two options. Select "Return to Keldagrim" and you will appear right next to the Black Guard HQ in West Keldagrim.

When you enter the minecart area, Veldaban will say the area feels familiar, but he can't exactly remember. Try to control the Dwarven Machinery and Veldaban will tell you yellow and green stones can be used to control direction. Ask Veldaban to use the stones while you travel in the train cart. (If after entering the final cavern Veldaban is not there, log out then log back in).

Pull the bridge lever to lower the bridge so Veldaban can cross over. He will start following you so move appropriately to get him across the bridge.

A cut scene follows of an Ogre shaman transforming Brunolt into a Chaos dwarf. Veldaban will remember he's seen this process before, crying out "Hilda! No!" attracting the attention of the Red Axe Director and Colonel Grimmson.

Veldaban will run into the Grand Exchange Order Slips room behind you. Follow him inside. If you don't have a high combat level, you may want to turn on Protect from Missiles as a nearby hand cannoneer will appear and he can hit up to 380 if you are not praying against ranged.

Talk to Commander Veldaban, and he will reveal that Hilda was abducted and transformed into a Chaos dwarf. Talk to him further and he will tell you about the sorting machine. Grimsson will interrupt your conversation and reveal that the cannoneer defeated back at the tower in Keldagrim was in fact Hilda herself who was Veldaban's lady-friend.

Open your package and take out the metal rectangle and turnscrew. Use the metal rectangle on the sorting machine to stop it. Then use the turnscrew on it to unscrew it from the wall. An animated sequence will follow showing the adventurer tipping the machine over, revealing an escape hole in the wall behind it.

Squeeze through the hole, ride the train cart (make sure both hands are free to do this), and a cutscene will follow showing the adventurer and Veldaban escaping and warning the Consortium of the threat to Keldagrim. 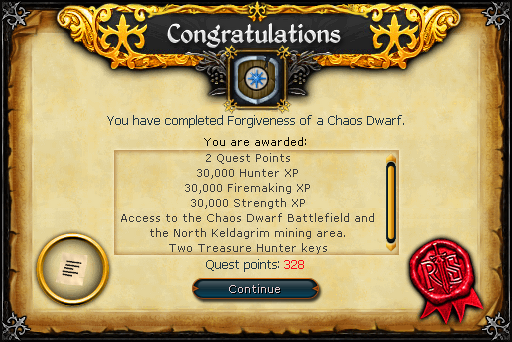 Completion of Forgiveness of a Chaos Dwarf is required for the following:

Brunolt is turned into a chaos dwarf