Map images are used on a lot of pages, such as NPC and shop articles, for showing exactly where something is located. Yet there are no clearly stated standards for the creation of these images, therefore I am proposing some.

An example of a map created using these is this.

General support and addition - In most cases, 250px square is sufficient, but in some cases, it may not be enough. Maps should be easily useable by someone who is completely unbeknownst to a region. Particular areas that may prove troublesome with a small, for example, the Kharidian Desert and the Elven Lands. There's really nothing wrong with a big map; we can just resize it in the infobox and note to click on it to enlarge.

Also needed of a note: you should specify that you should shut off map markers and dungeon links. I don't think there's any problem with map icons or area names, but I guess if anyone has a problem with it, now would be the time to bring it up.

Can you also give a little more explanation (maybe step-by-step) on what you mean with the border. I don't exactly follow. MolMan 19:05, December 11, 2013 (UTC)

Select the 75x75px area and fill with the 25% transparent colour. Then, without deselecting or changing colour/opacity at all, switch to pencil and put a single Circle (03) line around the edge of the marker.

Okay, that's where I wasn't following. I don't have those brushes. I'm not sure if your gimp is older or not, do you know what version you have/when you downloaded it. Also, if you can be bothered, would you mind making a template for the orange box for easy pasting? MolMan 19:21, December 11, 2013 (UTC)

I've had a go at a template. Save this. Experimenting a bit tells me I can't move it after pasting, but it will go to wherever I have selected.

Cool, thank you. I find it incredibly stupid that my later version of GIMP seems to have less tools than earlier versions... MolMan 14:31, December 12, 2013 (UTC)

Support - YES. PLEASE. As Mol said on my talk, "Our maps are mostly shit and it's pretty depressing." Standards for maps would definitely help. I would totally help update our current maps if someone made the template for the orange box thingy.

Support - Yes, standards for these would be great. As an addition what are thoughts on having map labels on/off? I think it may be better to turn these off.

Support - Being consistent on things like maps is always a good thing and the specifications here look fine. – Ozank Cx 22:26, December 11, 2013 (UTC)

Support - Will definitely help to keep all map images consistent.

Support, but with a different colour - I was thinking the same thing as fergs. Why not blue? I'm not sure if that has been the standard for any time in the recent past, but there used to be blue boxes for NPC locations. Usually there's much less blue than most other colours on the map, so blue will stand out much more. For that example image, I think the box really doesn't stand out enough, and the marker stands out a bit too much (it almost looks like a feature on the map instead of a marker). I suggest using a blue box, with an 1px or 2px border, with inside that a blue dot that looks just like the ones used in imagemaps for marking monster locations. It would basically look a bit like this (with the code for the dot being the same as this): 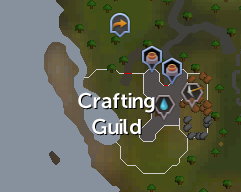 Of course that is not a final version or anything, but atleast it doesn't use a box in a colour that would blend in slightly with the background (very few blue parts of the map, other than water, where not many NPCs are), and the dot doesn't use roughly the same colour combinations as RuneScape might use for their icons, so it is atleast clear that it is a label on the map, not some feature on the map already. PS: this image is interactive, but I'm not sure if it would be better to upload map files without labels and then adding the label on top like I did, or just to stick with the current format. I think the current format is justfine, because the image doesn't need to be interactive anyway, since you're already on the page. JOEYTJE50TALK pull my finger 10:27, December 13, 2013 (UTC)

Apparently that makes maps at 150x250px or something, so smaller than I am proposing, and definitely too small to address Mol's concerns about the more featureless areas of Gielinor that maps might be needed of. There is also the fact that when I made this thread, there was absolutely no one who even knew of that program in S:C, so I couldn't have taken it into account.

Question/Pre-closure - Are we going ahead with the orange square? I got ahold of Guthix1110 and he gave me the source code to his program, so I was able to alter the dimensions. There are a few things I'd like us to sort out before this gets closed and we set the standards:

It would be good to get answers to these questions very quickly so we can start working on them. It wouldn't be hard to make a few hundred in a day. ʞooɔ 11:27, December 31, 2013 (UTC)

I'm not sure one uniform colour would work. Blue doesn't work for water areas, white for snow, green for forests, black for wild, etc.

Do you have an example, eg blue on the fishing platform?

3. Centered in general is best but in specific cases might not be preferable - let's say you have an NPC right at the end of a very long path, then you'd rather show more of the path than just show black space around him just to center it.
2. Similarly, zoom might be problematic as well. For an NPC in Meiyerditch I'd rather have the map zoomed out a lot, while that wouldn't be necessary for an NPC on the Fishing Platform.

Retrieved from "https://runescape.fandom.com/wiki/Forum:Standards_for_map_images?oldid=22406938"
Community content is available under CC-BY-SA unless otherwise noted.