Engineer for the Piscatoris Fishing Colony. 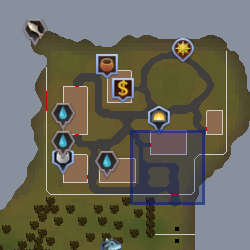 Franklin Caranos is the brother of Herman Caranos and works in the Piscatoris Fishing Colony with his brother. They both grew up in East Ardougne but, unlike Herman, Franklin never felt something for fishing. Instead, he was more interested in machinery and engineering, hence his current job at the colony. After completion of Swan Song, he will buy all iron sheets at 20 coins each. However, it is not recommended to make iron sheets to make money, as the cost of one iron bar is far more than the sale price of an iron sheet.

Retrieved from "https://runescape.fandom.com/wiki/Franklin_Caranos?oldid=24562726"
Community content is available under CC-BY-SA unless otherwise noted.