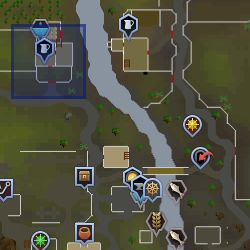 Fred the Farmer is a farmer featured in the Cold War and One Small Favour quests, and the Sheep Shearer miniquest. Players can find Fred at the farmhouse north-west of Lumbridge, south-east of the Windmill and to the east of the Lumbridge sheep pen. His farm is where players can find onions, which sometimes are hard to find growing wild, especially for non-members.

If the player talks to him and says that they have seen the 'Thing', (which is actually just two penguins but he is mortally afraid of it, thinking it's a "shapeshifter") he will start to go on about grabbing chickens and running to the hills. In the end, the player will say that it is two penguins disguised as a sheep. He will ask the player if they have been "in the sun" too much, a reference to sun madness.

Fred also plays a role in One Small Favour where he is involved in obtaining chickens for that quest.

Players who completed the Sheep Shearer miniquest before its overhaul may go back to Farmer Fred and claim another 1940 coins as a reward because the black wool 'sold exceptionally well'. This is to make up for the fact that the old reward was 60 coins instead of the current 2000.

Fred had to move his farm across the path, as Saradomin placed his war camp where his farm originally was.

Retrieved from "https://runescape.fandom.com/wiki/Fred_the_Farmer?oldid=24562207"
Community content is available under CC-BY-SA unless otherwise noted.