Having a runecrafting urn of any type in your inventory while crafting runes or training in the Runespan will provide you with a whopping 20% of additional experience. So don't forget them!

Parts of ethereal outfits could be won as prizes from Treasure Hunter between 18 October and 20 October 2014. The death ethereal outfit, law ethereal outfit and blood ethereal outfit consist of head slot, body slot, leg slot, hand slot and feet slot items. When wearing a complete version of any of these three outfits, players gain the following bonuses: 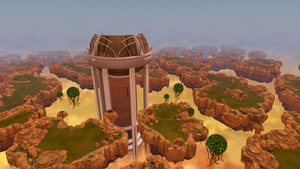 Training at Runespan is the most effective method to level Runecrafting for free-to-play players. Runespan is a dimension composed of islands that are inhabited by nodes, creatures and floating essence. Runespan is split over 3 levels; the upper level, middle level and lower level. Free-to-play players are able to enter two of these levels, the lower level and middle level. While at Runespan, players can siphon from creatures and nodes to receive runes and Runecrafting experience, until the creature or node is broken down. Creatures will always respawn on the same island that they were broken down on, while nodes spawn more randomly. Rune essence is required in order to siphon from creatures and nodes. Players can gain up to 25 essence from floating essence, if they currently have less than 25 essence, and 50 essence upon successfully breaking down a creature. The runes and rune essence used within Runespan are untradeable and cannot be taken out of the area. Runes can be used to use platforms to move between the dimension's islands. Upon leaving Runespan runes are converted into Runespan points, which can be used to purchase rewards.

To effectively train within Runespan players should prioritise siphoning from nodes that give the best experience rates, using platforms to travel to islands where these nodes are present and obtaining more rune essence from floating essence when necessary. These nodes tend to spawn more frequently on the upper levels of Runespan, so players should train at the highest level that they are able to access. Use the tables below, which show a theoretical experience per hour that could be achieved if a player with 99 Runecrafting were able to constantly siphon from a particular type of node, to identify the nodes which give the best experience rates.

While training in the Runespan, players will accumulate runespan points that they can spend in Wizard Finix or Wizard Rinsit's runecrafting shops. However, the only items that free players are able to buy are altar teleports (10 for 2K points) or Unstable essence (200 for 500 points). Therefore, players that are not interested in altar teleports should spend all their points on unstable essence, then use them on the Body Altar (the highest level altar that free players can use).

Retrieved from "https://runescape.fandom.com/wiki/Free-to-play_Runecrafting_training?oldid=25755570"
Community content is available under CC-BY-SA unless otherwise noted.