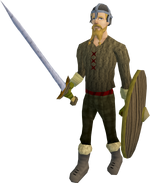 The Fremennik are a group of human Norsemen who inhabit the Fremennik Province and certain islands in northern RuneScape.

During the Fifth Age, they were in a war with the magical Moon Clan of Lunar Isle, because of their dislike of Magic and all who use it. The Fremennik did not approve of the crafting of Rune stones, and thought that humans should only use the runes they were given by the gods. The hatred between the two clans was lessened during the Lunar Diplomacy quest. During the Sixth Age, following the events of the Hero's Welcome quest, the two sides have resolved for peace, in V's memory.

The player become an honourary Fremennik after having completed The Fremennik Trials quest. Then upon completion of the trials, the player is given a Fremennik name (however, if the player has a Ring of charos (a) they may change their name by speaking to Brundt the Chieftain). Players may speak with the villagers and find out a lot more about them. The purchase and wearing of Fremennik armour is also made available after the trials. Though, the Fremennik at Daemonheim will not address the player by their Fremennik name for reasons unknown.

The Mountain Tribe, a formerly nomadic group originally were part of the Fremennik also (as were the Moon Clan), until a dispute over whether to settle and build a village, or keep on living as nomads, tore them apart.

Like any other human group, the Fremennik were a nomadic tribe. They lived a simple life, hunting the local animals, fishing, and travelling throughout the Fremennik Province so as not to exhaust the land's rich resources.

Eventually, they abandoned their nomadic way of life, creating the village of Rellekka. While this greatly improved life for most Fremennik, some disagreed with this way of living and left the tribe, grouping together to form the Mountain Tribe. Until today the Mountain tribe travels around the mountains east of Rellekka. This angered the Fremennik, and the two tribes were somewhat bitter towards each other ever since, until the player fixes the relation up a bit during the Mountain Daughter quest.

Some years after, a Fremennik seer discovered a rock that was revealed to be rune essence, which gave the Fremennik the ability to use magic. This knowledge quickly spread to other kingdoms outside of the Fremennik province, making them even more powerful than before. The discovery of magic caused a great struggle within the Fremennik tribe. Some believed the Fremennik could use the magics of the essence to defend themselves from the races that were constantly seeking to conquer their land. Others believed that the rock was not to be used by mortals, and that the gods would destroy them if they used it. The tension grew until many more Fremennik separated themselves from Rellekka and departed for Lunar Isle, where they would form the Moon Clan. The Moon Clan became the most developed in magic in the human history. The Fremennik are at war with the Moon Clan to this very day.

Taking advantage of Rellekka's temporary weakness in numbers and absence of awareness, the Mountain Tribe attacked the village and stole the ancient rock which symbolised the discovery of the rune essence, taking it back to their encampment. The two tribes avoided contact from that point on, until the Mountain Daughter quest, in which the player breaks the rock in two and gives one half back to the Fremennik in Rellekka.

In Fremennik history, other groups had splintered from Rellekka as well.

In years 32-60 of the Fifth age, groups of Fremennik conducted a series of armed invasions of Kandarin, Asgarnia, Misthalin, and the Imcando dwarven territory of Ice Mountain in an effort to stop the creation of rune stones by humans. Eventually the crusade faultered and the settlement of Barbarian Village was established; eventually becoming the permanent settlement of Gunnarsgrunn.

The Fremennik also spread to establish the kingdoms of Miscellania and eventually Etceteria after it broke away from Miscellania. They established the Fremennik Isles, formed by Neitiznot and Jatizso, and formed outposts such as the one hosting the battle of Barbarian Assault and the one atop Daemonheim. The Fremennik are never as far away as they seem being found battling Dagannoths at Waterbirth and escorting adventurers near Al Kharid and Taverley to Daemonheim.

Retrieved from "https://runescape.fandom.com/wiki/Fremennik?oldid=22894251"
Community content is available under CC-BY-SA unless otherwise noted.