View source
watch 02:34
Fire Emblem Warriors: Three Hopes - The Loop
Do you like this video?
Play Sound
This article is about the group chat. For the chat with certain friends only, see Private chat.

The Friends Chat feature allows any player to create their own chat channel and assign ranks to other players in their channel. Similarly to public chat, any messages sent in a chat channel are seen by all players in that channel, except if the sender is on any player's ignore list or vice versa.

Friends Chat is available to everyone, and was released in the Clan Chat update on 6 August 2007. Players do not need to set up their own channel in order to use someone else's. Later, on 12 April 2011, another Clan Chat was released, with the former Clan Chat renamed to Friends Chat.

Players in a Friends Chat channel send messages in the same way as with public chat, except using a slash (/) at the beginning of every line. The slash does not appear when the message is displayed. As with private chat, the other players can be logged into any server. Selecting the Friends Chat option at the bottom of the screen eliminates the need of using a slash (/). A leading slash will not be removed if the Friends Chat channel is accessed through the Lobby.

Any player can create their own channel, using the "Friends Chat settings" button in the Friends Chat interface:

The player will then be presented with an interface that allows them to set ranks for people on their Friends List and control who can enter, talk, and kick other players from the channel. They can also set a channel name of up to twelve characters, which will appear on the side of the chat box to indicate something said on that channel. Censorship still applies to the channel name, and Jagex has made it so the word "mod" cannot be included in the name either (e.g. "I Am A Mod" or even "Gamemode"). The words Staff, and Admin are included in this censor.

Players that have the rank required to kick others in the channel can only kick those with rank lower than theirs, for example, a general with kick power cannot kick other generals. They are free to kick those at captain rank or below, however, the channel owner may disapprove (and can lower their rank). Players kicked from a channel cannot re-enter for an hour; in addition, those on the channel owner's ignore list cannot enter a channel at any time.

If a channel reaches the player limit (100) and any ranked player tries to join, another player with a lower rank than the one entering will be kicked to make room. Otherwise, any other person will be told "This chat is currently full", and will have to wait until someone leaves to rejoin.

A Jagex Moderator can always join a chat, will always be able to chat on it, and can kick any player off the chat, including the owner, irrespective of any rank given by the owner of the Friends Chat. 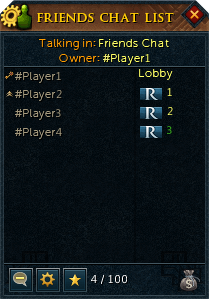 The Friends Chat interface shows the name and creator of the channel the player is currently chatting on. In addition, each player in the channel (up to 100) is shown on a list, along with their channel rank and current world.

If a player is kicked from the chat, the player will be able to rejoin after one hour. Alternatively, the chat is reset if it is emptied and those kicked can rejoin then.

The owner can limit the accessibility of the Friends Chat by adjusting the "Who can enter chat?" or the "Who can talk on chat?" options.

The interface also contains a button for players to enter or leave a channel. Jagex moderators have powers equivalent to a channel owner if they join a channel.

Players who are breaking rules in chat channels can be reported using the report abuse button as normal.

When attempting to join a friend chat channel, the player may receive one of the following error messages and fail to join the channel. See the table below for information about the message and how to resolve it.

On 15 October 2008, Jagex released an update that shows all players in the same chat channel as purple dots on the minimap.

An update on 13 October 2009 made it so players logging out while still in a Friends Chat would immediately rejoin that chat when logging back in.

On 10 January 2011 an update was added which introduced a manual "kick/ban" button beside the "toggle-LootShare" button, in addition a new ability to kick players from the chat, using the chat window. The ability to "refresh" a temporary ban using the manual kick button was also added, which resets the temporary ban to 1 hour when someone's name is added who is already banned.

On 1 March 2011 an update made it so a notice is shown whenever someone attempts to kick/ban another player in a Friends Chat. The notice displays to everyone in the channel who is attempting to kick whom. It has brought about controversy in larger channels, since it can easily spam large chats where kicks occur quite regularly.

A hidden update was added on 4 April 2011 which renamed the Friends Chat from its original name of "Clan Chat", according to the messages "Now talking in friends chat channel [channel name]” and “Changes will take effect on your friends chat in the next 60 seconds”, as well as the tooltip displayed when a player hovers over the friends chat tab on the runescape interface.

LootShare is another feature that Jagex added to the Friends Chat in the LootShare update of the 16 October 2007[1]. When LootShare is active, all players within a 16-square radius of a fallen monster have a chance to get the drop. There is an additional message in the chat box that informs the clan who received the drop, and what the drop was. Furthermore, receiving substandard drops or none at all increases the chances that a player will get a more valuable drop the next time.

LootShare is only available in certain worlds, noted by the world select screen. LootShare does not work for player-killing.

If players are looking for a Friends Chat channel to join, they may try looking in the Chat Directory Sticky in the RuneScape Forums. Sometimes a player may come across an unoccupied channel, but a few of them are popular.

Members may also advertise their Friends Chat there. Players are only allowed to advertise the chat channel relating to the username who posted it.