A former Knight of the Round Table. 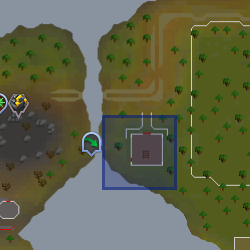 Sir Galahad, was a knight of King Arthur's Round Table and one of the three achievers of the Holy Grail. He now lives west of McGrubor's Wood and does not mind somebody stopping by to talk to once in a while, stating that it is rare that this happens. During the conversation, he may give players a cup of tea.

During the Holy Grail quest, he will give the player the holy table napkin which is used to get the magic whistle in Draynor Manor. The whistle is used to go to the Fisher Realm. The alternative to go to Fisher Realm is by use of the fairy ring code BJR.

One of the easy Seers' Village achievements is to obtain a cup of tea from him.

Sir Galahad is based on the real-world fictional character from Arthurian Legend.

Although he wears a holy symbol, he claims to not worship Saradomin.

Retrieved from "https://runescape.fandom.com/wiki/Galahad?oldid=25251956"
Community content is available under CC-BY-SA unless otherwise noted.