The Gamers' Grotto is a cave located just north of Falador (east of Falador lodestone), which was released when the Wilderness was restored on 1 February 2011. It contains four popular minigames: Stealing Creation, Clan Wars, Cabbage Facepunch Bonanza, and a portal to Fist of Guthix.

The Grotto has a teleport via the Games necklace, and can also be accessed quickly via the Fist of Guthix teleport on the Ring of duelling.

The Mystic's Camp, where Stealing Creation is played, is in the North of the dungeon, in the largest room.

To the South is the portal to the Fist of Guthix minigame. Enter the portal and you will be teleported directly to the cave, and exiting the cave will result in returning here.

To the East is the Clan Wars area, along with Larry, who sells team capes to players. There is also a one-click Bank Chest in the corner of this room. North from the Clan Wars portals, there is a separate room containing the Cabbage Facepunch Bonanza starting area.

The dungeon was originally created on the return of the player vs. player Wilderness on 1 February 2011. The three minigames that were accessed via the wilderness prior to this update, Stealing Creation, Clan Wars and Fist of Guthix, were all moved into the new Gamers' Grotto so that players would not have to pass through the wilderness to play. Another new area, the Forinthry Dungeon, was similarly added on the same date to contain a large number of the creatures that had previously been possible to kill in the wilderness.

Cabbage Facepunch Bonanza was later added to the Gamers' Grotto after an update on 6 March 2017. This moved the Bonanza from its original location just north of the Lumbridge crater, which was updated on the same date with to improve the appearance of the crater and surrounding area. 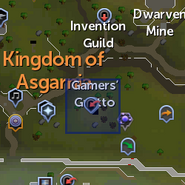 The location of the entrance to the Gamers' Grotto.

Free for all (dangerous) portal

Free for all (safe portal)
Community content is available under CC-BY-SA unless otherwise noted.
Advertisement