To obtain the ring of charos (a), you only need to complete the Wise Old Man's test.

To start the quest, speak to Queen Ellamaria in the Varrock Palace garden. When you mention the empty allotments, she says that they were recently installed as a surprise for her husband, King Roald's birthday. She plans to create the finest garden, grown with exotic flowers and trees.

When you offer to help, the Queen rudely accepts, calling you a lowly peasant. She says that the seeds must not be obtained by killing "everything that moves", but rather through persuasion, before handing you a list of the things she needs and the people to talk to for retrieving them.

The 'Art' of Persuasion

With the ring of charos, head to Draynor Village and speak to the Wise Old Man. The old man gives you a backdrop on Queen Ellamaria, saying that she was just a common barmaid at the Blue Moon Inn before marrying Roald. He also speaks about Charos and the origin of his ring.

Charos, a servant to Lord Drakan, fashioned a powerful ring that could enhance the wearer's innate coaxing skills upon wearing it. The old man agrees to enchant your ring if he can be certain that you indeed have a knack for diplomacy.

The answers to the questions are as follows:

After answering the questions, the Wise Old Man enchants your ring of charos. Now, when wearing the Ring of Charos (a), you will be able to persuade the NPCs on the Queen's list by using relevant dialogue, indicated by (Charm).

The Queen's garden does not have its own tool leprechaun, however there is one at the tree patch nearby. Watering is not needed for the Queen's garden; neither is compost, except for the two varieties of orchid seeds.

You cannot pay off any farmer for watching your plants, as they must be looked after by you. Remember to always equip your enchanted ring of charos while requesting the seeds from the farmers.

It is recommended to plant any seed immediately after you obtain them, to save growing time. With the exception of the white tree, the plants do not take long to grow, so it is advised that you do them at the end.

The NPCs can be visited in any order, but it is recommended that you visit them in the order that follows:

Items needed: A filled plant pot and watering can, a pair of secateurs.

Head to Dantaera at the Catherby allotment farming patch. Speak to her with the ring of charos equipped and select the Charm options wherever possible. After convincing her that you're only trying to save a dying tree species, Dantaera instructs you to cut a branch from the White Tree on top of the Ice Mountain, near Falador.

After talking to Dantaera, go to Ice Mountain via any transportation method you want. The shortest paths are teleporting to the Edgeville or Falador lodestone and walking up the mountain. Climb to the northern side, near the Oracle, and you'll find the white tree. Take a sampling with your secateurs, plant it in your filled plant pot and water it.

Items needed: A non-toolbelt fishing rod. (An oily fishing rod does not work)

From the Ice Mountain, head north-east to the Monastery. At the north end of the area, you'll find Brother Althric next to his rosebush garden. Try to talk to him using the Charm dialogues, but he will immediately sense that you are using an unnatural power and "concealing something of great evil." He suggests you either throw the "dark talisman" down a well or simply destroy it.

Do not throw away the ring before being told by Althric to do so. If you instead destroy it, you will have to go to Fenkenstrain's Castle or Harmony Island and pickpocket Dr. Fenkenstrain to recover the ring.

Go to Edgeville and throw the ring down the local well, west of the bank. With the ring not in your possession anymore, return to the Monastery and attempt to take the seeds. Althric will be pleased that you have "taken the road back towards the light" and will gladly allow you to pick a few red, pink, and white rose seeds from his rosebushes.

Before departing, Althric will accidentally let slip a suggestion on how one might retrieve the ring. To do so, use your fishing rod/fly fishing rod on the well in Edgeville. It might take several tries, but you will eventually get it back.

Items needed: Three onion seeds. It's recommended to bring some marigold seeds to protect the allotment onions from disease.

Either use an Ectophial or charter a ship from Port Sarim to Port Phasmatys, which will have a reduced cost of 650 gold rather than 1,300, due to the Ring of Charos (a).

Go to the undead farm between Port Phasmatys and the Fenkenstrain's Castle and speak to Lyra at the allotments, selecting the Charm option until she requests you to grow some onions for her. Agree to her offer without using the Charm option.

Plant some onion seeds in an empty allotment, water the plantation every turn, and cure disease if necessary. If you have fully grown marigolds planted in the nearby flower patch, you do not need to worry about the crop becoming diseased. The onions grow in ~40 minutes, after which you'll get the message, "Perhaps I should check the onions that I planted for Lyra...". When the onions are fully grown, make sure you have two open inventory slots as you will need two sets of orchid seeds in order to complete the quest.

Items needed: Three cabbage seeds. It's recommended to bring some rosemary seeds to protect the allotment cabbage from disease.

Head to the farming patch just north of East Ardougne and speak to Kragen at the allotments. Again, select the Charm option until he requests you to grow some cabbages as a gift for him and agree without using the Charm option.

Plant some cabbage seeds in an empty allotment, water the plantation every turn, and cure disease if necessary. If you have fully grown rosemaries planted in the nearby flower patch, you do not need to worry about the crop becoming diseased. The cabbages grow in ~40 minutes, after which you'll get the message, "Perhaps I should check the cabbages that I planted for Kragen...". When the cabbages are fully grown, make sure you have two open inventory slots.

Go to the allotments between Falador and Draynor Village, and talk to Elstan about delphinium seeds. He agrees to give you some seeds, if you can grow some marigold for him. Agree without using the Charm option.

Plant a marigold seed in the nearby flower patch, and grow it. The marigolds will grow in ~18 minutes. If you give him a marigold you obtained before the quest or plant one before talking to him, he will tell you he hasn't seen you grow it and you won't get the seeds.

Travel to Taverley and speak to Bernald, who is just south of the The Pick and Lute Inn. With the help of your ring of charos, he'll reveal that his vines are diseased and desperately need a cure. Use one plant cure on the diseased grapevines, but it won't work. Talk to Bernald again, and he will instruct you to find Alain at Taverley.

Go to the tree patch at the Taverley entrance and speak to Alain about strong plant cures, not using the Charm option on him. He provides a process of adding some rune essence dust into the plant cure to enhance its power.

Use a rune essence or pure essence on an anvil to crush the stone into rune shards, and then grind the shards to make some rune dust. Use the dust with the plant cure potion to get some strong plant cure.

Bring the potion back to Bernald, and use it on his diseased vines to cure them. Bernald, happy to see his vines healthy again, rewards you with some Burthorpe vine seeds.

Statue of a former King - Lumbridge

Walk or teleport to Lumbridge, and then walk out of the castle gate. Examine both statues just outside the gate, and use the trolley on the southern one, described as the statue of a "former King".

Push or pull the trolley across the bridge to the east of the castle. Once the trolley is on the other side of the River Lum, the scene will immediately change to the north backyard of Varrock palace. Continue moving the trolley to the east, then south, and into the Queen's garden. Move the statue in front of the empty plinth closer to the entrance and "place" it. The trolley will return to your inventory automatically.

If you take too long to do this, you will receive a message saying, "The guards have recaptured the statue of a king, and placed it back in Lumbridge."

Walk or teleport to Falador. The statue you need is in the main city square, near the north entrance gate. Use the trolley on the statue, and a quirky cutscene will play, depicting the guards being killed by a player spoof. You can now leave with the statue without being harassed by guards.

Once the trolley is out of Falador, the scene will again change to the north backyard of Varrock palace. Again, push or pull the trolley into the Queen's garden and place the statue in the central empty plinth.

If you take too long, the guards will notice that the statue has been stolen and you will get a message saying, "The guards have recaptured the statue of Saradomin, and placed it back in Falador."

If you haven't already, plant the seeds in the empty allotments and wait some time for them to grow.

After all the patches are fully grown and the statues in place, talk to the Queen and she will ask you to escort King Roald to his present. Go to the King and talk to him with your ring equipped, selecting the Charm options whenever possible and have him follow you into the garden. After a cut scene, the quest will end and the Queen will reward you for your services.

Giving King Roald a tour of the completed garden.

The completed Garden of Tranquillity
Click an image to enlarge 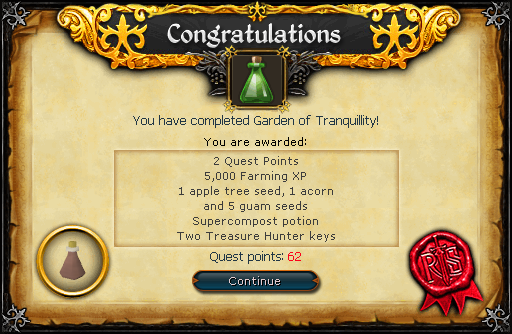 Completion of Garden of Tranquillity is required for the following:

The Death of Billy and Bob

Roald Tours The Garden
Retrieved from "https://runescape.fandom.com/wiki/Garden_of_Tranquillity?oldid=7372298"
Community content is available under CC-BY-SA unless otherwise noted.