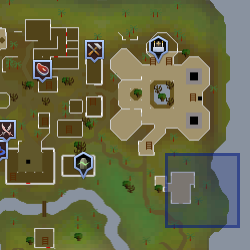 Sergeant Garkor is a gnome hiding in Ape Atoll. He features prominently in the Monkey Madness quest. Garkor is the leader of the 10th Squad, a battalion in the gnomish military.

Following the plot of The Grand Tree quest, Garkor was instructed to take his squad to the eastern Karamjan Shipyard. Here the anti-human extremist Glough had secretly begun construction on a fleet of ships which he planned to use to invade the human nations. However, since his plot was foiled during The Grand Tree, the shipyard was now scheduled for decommission.

When the 10th squad was travelling to Karamja via military glider, however, they were blown off course, stranding them on Ape Atoll. Once on the island, Garkor investigates King Awowogei, the leader of the intelligent monkeys on the island. He, like the rest of the Squad, also helps the player fight the Jungle demon at the end of the quest by shooting it from a distance.

Once the quest is complete, Garkor remains on the island with the rest of his squad as they gain further information on the monkeys.

During the quest, Garkor will give the player the 10th squad sigil, which must be worn to fight the Jungle demon.

It is possible to get Garkor as a customer in the Gnome Restaurant minigame. He is located by the king of Ape Atoll, on the right side of his house.

Retrieved from "https://runescape.fandom.com/wiki/Garkor?oldid=24562816"
Community content is available under CC-BY-SA unless otherwise noted.