North of Falador (during WE2), Tuska (after WE3)

A sad but determined Icyene with no wings. 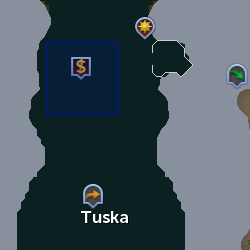 Garlandia is an icyene, and a member of the Godless faction. She used to be found north of Falador, at the crossroads. She used to be a noble among her people, until she conflicted with Saradomin.

At a banquet on New Domina, the homeworld of the icyene, Saradomin asked Garlandia if she would rather be a bombardier or in his infantry. Garlandia responded that she would rather not fight at all and that the Icyene should practice a peaceful approach first. Saradomin, claiming that he was worried other Icyene would follow her message and resist their militarisation, gathered everyone in the courtyard and ripped Garlandia's wings off in front of them, which is the equivalent of a death sentence for an icyene. He claims he did this to show the other Icyene that if they were to survive their current war, peace would not work and that they needed to fight. But Garlandia says that it was because she hurt his pride.[1][2]

Garlandia survived the harsh winter that she could no longer migrate away from, basking in the sparse sunshine as much as she could. The conditions she endured bleached her skin white, and cemented her hatred for all gods and their wars. Eventually she found her way to Gielinor, and joined the Godless faction in the Sixth Age.

After Tuska was defeated, she appeared on her corpse, along with Scopulus and Kara-Meir, to represent the Godless faction.

Retrieved from "https://runescape.fandom.com/wiki/Garlandia?oldid=24565040"
Community content is available under CC-BY-SA unless otherwise noted.