Guardian of the market gate. 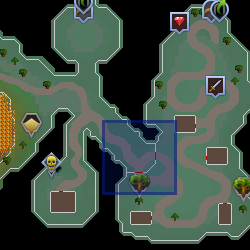 The Gatekeeper is a tree like figure who guards the gate to the Zanaris market area. He will only let players pass if he is paid one cut diamond (he will waive the fee if the player has done Fairytale III - Battle at Orks Rift). He says that the diamond is used to make fairy lights. He guards the dragon dagger and dragon longsword shop, and the gem market.

He says the door man that was there before the Zanaris update was his father. When asked about this, he replies "I got my good looks from my mother."

There is another gatekeeper guarding the shady grove that is filled with baby tanglefootii.

Retrieved from "https://runescape.fandom.com/wiki/Gatekeeper?oldid=24562799"
Community content is available under CC-BY-SA unless otherwise noted.