The gem cape is a discontinued cosmetic override that can be obtained from a gem cape token, which could have been obtained through Treasure Hunter or trading with other players.

A player with the gem cape equipped.

A player with the Gem cape equipped showing it's three-dimensional effect. 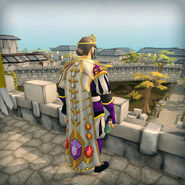 The official news image depicting a player using the Gem cape override.
Click an image to enlarge
Retrieved from "https://runescape.fandom.com/wiki/Gem_cape?oldid=21052600"
Community content is available under CC-BY-SA unless otherwise noted.