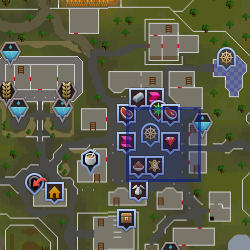 His stall's default stock is 0. It changes when players buy and sell from his stall. It is possible to turn a profit by buying his gems and re-selling them on the Grand Exchange. However, since players rarely sell their gems to him, it is highly unlikely you will make a large profit.

Retrieved from "https://runescape.fandom.com/wiki/Gem_merchant?oldid=24562649"
Community content is available under CC-BY-SA unless otherwise noted.