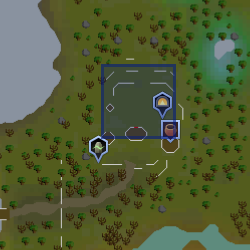 General Hining is the second-in-command as well as the leader of King Tyras's army in Isafdar, responsible for resisting the dark elves led by Lord Iorwerth and protecting Tyras from would-be attackers. After Tyras' death during Regicide, Hining assumed full responsibility for the day-to-day running of the Tyras Camp. He plays a background role in the Regicide and Plague's End quests, and a minor role in the Catapult Construction quest.

He pins his hope on the catapult, seeing it as an essentiality to the lines of defence for Tyras Camp, and also has a strong disliking towards the catapult guard, finding him incompetent and a waste of army rations.

After the events of Regicide, he tells the player to leave as he leads Tyras's last band of loyal soldiers to fight the 'evil forces' that are coming.

During Plague's End, he is convinced by the player to strike at the Iorwerth Clan's forces, since this will distract them so that the player and rebel elves could safely gain access to the Grand Library and give the elven clan leaders time to regrow the city of Prifddinas, staying true to his mission to fight the 'evil forces' with the last of Tyras' troops. After the quest, General Hining remains in the Tyras Camp under the command of King Thoros.

Retrieved from "https://runescape.fandom.com/wiki/General_Hining?oldid=24563332"
Community content is available under CC-BY-SA unless otherwise noted.