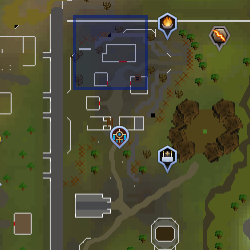 An ugly, yet festive, green creature.

General Wartface is one of the Goblin Generals who has a liking for the colour green. He is found in the Goblin Village, which is near Falador and directly north of Doric's Anvils. Wartface is very rarely seen without his rival and co-general, General Bentnoze, with whom he consistently argues with about armour colours to what to eat. Wartface's favoured sergeant is Sergeant Slimetoes.

Wartface, along with Bentnoze, constantly picks on Grubfoot, a small goblin inside the general's huts. Despite this, the Generals are notably peaceful, for goblins; they rarely fight against other races, aside from the dwarves. The Generals were originally from different tribes, namely the Thorobshuun and Garagorshuun tribes. This is possibly why they do not agree on many issues.

During the Lost Tribe quest, he and General Bentnoze teach you two new emotes: the Goblin Salute and Goblin Bow, respectively. He also gives his side of the old legend on the Dorgeshuun tribe, stating that they did not want to fight the dwarves. Consequently, Bandos put them into a cave and sealed it up.

He, along with Bentnoze, represent goblinkind on the Secret Council of RuneScape, though as usual they fight each other over who gets to sit in the chair. He is present when the Culinaromancer is freed during Recipe for Disaster and is subsequently frozen in time. In order to save them, they must be served slop of compromise, a mixture of food liked by both generals.

General Wartface can be found at the Heimland Games area during the 2010 Christmas event, arguing with General Bentnoze over the correct colour of the Christmas tree fire and the seals.

Retrieved from "https://runescape.fandom.com/wiki/General_Wartface?oldid=24562115"
Community content is available under CC-BY-SA unless otherwise noted.