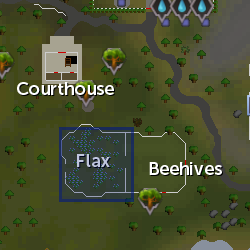 Geoffrey is a flax farmer found in the flax field south of Seers' Village. If players have completed at least the easy Seers' Village Tasks, he will give the player varying amounts of flax daily, if they have earned a Seers' headband (does not have to be worn). Although his name is Geoffrey, he prefers to be called 'Flax'. Like Zaff and Wizard Cromperty, he resets at midnight UTC.

Geoffrey has an obsession with flax. He refers to himself as 'Flax' after the players receive Seer's headband 1. After obtaining a headband from the seer he will tell you to call Geoffrey by his 'Proper' name Flax. When you asked why, the seer says it's pretty sad that a nice boy could go crazy. Even though Geoffrey tells you not to be greedy and other people want flax after receiving your flax for the day, he does not seem to stop you from picking it yourself. When you ask for more flax than you can get during the day, he doesn't appear to be angry that you are 'greedy', this could be debated that he really doesn't have an obsession over flax, but wants attention of some sort.

Retrieved from "https://runescape.fandom.com/wiki/Geoffrey?oldid=24563750"
Community content is available under CC-BY-SA unless otherwise noted.