A member of the Piscatoris Fishing Colony. 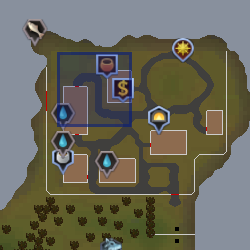 George Laxmeister is a current resident of the Piscatoris Fishing Colony, a small monkfish-catching colony on the coast of the Lunar Sea. George is amongst the colony's fishermen. Though, due to Sea Troll attacks, he has been unable to work.

According to George, he was born in the Asgarnian capital city of Falador, where he worked with his sister, Emily, in the Rising Sun Inn. Deciding he wanted a more outdoor job, he left his family and moved to the northernmost border of Kandarin, where Herman Caranos had recently settled the colony. Finding the pay good and the work not overly difficult, he has come to enjoy his life fishing.

George seems very knowledgeable about the colony's residents and will happily share what he knows with visitors. He is also happy to provide information on the colony and will explain the seaweed-covered nets to the south. After the player completes Swan Song, skeleton mages will infest the colony's dorms, and George will ask the player to help kill them.

Retrieved from "https://runescape.fandom.com/wiki/George_Laxmeister?oldid=24563488"
Community content is available under CC-BY-SA unless otherwise noted.