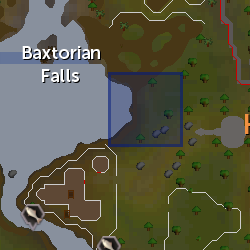 Gerald is a man wandering near the banks of the River Dougne, south of the massive chain of rapids known as Baxtorian Falls. Gerald appears to be a fisherman looking to harvest the native trout and salmon that make their home in the nearby stretch of water.

Gerald can be found very close to where a player will wash up if they attempt to traverse Baxtorian Falls' rapids without a rope, a fact he comments on in an issue of Postbag from the Hedge. If spoken to, Gerald will discuss some of the area's tourist attractions. He also makes a brief mention of the legendary treasure said to have been left in the falls by the elven king Baxtorian some 200 years ago, in the late days of the Fourth Age. He says that, although many adventurers come searching for it, none have found any trace of Baxtorian's legendary tomb.

Retrieved from "https://runescape.fandom.com/wiki/Gerald?oldid=24563523"
Community content is available under CC-BY-SA unless otherwise noted.