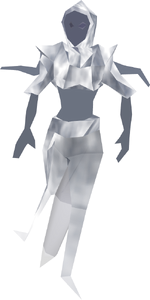 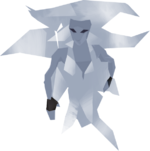 A ghost is an undead monster that is found in various places and dungeons. As they are undead, the salve amulet effects work well on them. Most ghosts are rarely used for training, but do have a chance of dropping the Ghost hunter armour. Level 50 ghosts, which can be called forth in the Forgotten Cemetery after the Spirit of Summer quest, do have good drops, but they are in the Wilderness. To call forth the level 50 ghosts, the player must first close the coffins then use Jennica's ring to enter the spirit realm at the graveyard, open the coffins there, then leave the spirit realm and repeat after all four are killed.

Players must kill certain ghosts in Melzar's Maze to progress through a level of the maze. The ghosts in Melzar's Maze can be spoken to with an Amulet of Ghostspeak (which you get from The Restless Ghost and is untradeable) or Cramulet; their speech hints that they were victims of Elvarg the dragon. In Daemonheim they have the power to heal themselves from injuries.

Other ghostly creatures are classified as ghosts and thus count towards fulfilling a Slayer assignment for ghosts. These include:

Some creatures that seem ghostly are not classified as ghosts and do not count towards fulfilling a Slayer assignment for ghosts. These include:

Also note that the inhabitants of Port Phasmatys, the Ectofuntus, and nearby areas are ghosts but cannot be attacked.

All are level 25 unless indicated otherwise.

Following the Halloween 2014 event, ghosts have a chance to drop the cremation ability and the four pieces of ghost hunter equipment. As of the 11 January 2016 update, they also have the chance to drop the deployable herb burner.

Retrieved from "https://runescape.fandom.com/wiki/Ghost?oldid=22739816"
Community content is available under CC-BY-SA unless otherwise noted.