Start a Wiki
This article is about the NPC that takes players to Dragontooth Island. For the NPC next to the ghostship, see Ghost captain (ghostship). 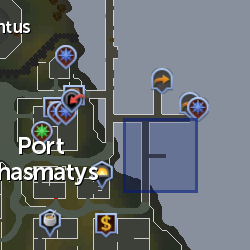 The ghost captain is a ghost on the docks of Port Phasmatys. He takes players to Dragontooth Island free of charge in a small rowboat located in the south eastern area of the dock, just east of the furnace.

He can also be found on Dragontooth Island, and will return players to Port Phasmatys without charge.

As with all ghosts, you must be wearing a ghostspeak amulet obtained from The Restless Ghost quest in order to understand and converse with him, unless you have completed the hard Morytania achievements.

Retrieved from "https://runescape.fandom.com/wiki/Ghost_captain?oldid=24562577"
Community content is available under CC-BY-SA unless otherwise noted.