Ghosts Ahoy is a quest in which you help the villagers of Port Phasmatys pass on to the afterlife.

East of Canifis is a ghost port. Not meaning that it's deserted. It's full of ghosts! For some reason, they're stuck in RuneScape, but some aren't happy with that. Can you help?

Port Phasmatys is located east of the Haunted Woods. To start the quest, head to the northern-most house in Port Phasmatys and speak with Velorina. To enter Port Phasmatys, you can either pay 2 ecto-tokens as an entrance fee or charter a ship to reach the town. Keep in mind that each entry through the gate, until the end of the quest, will cost you 2 ecto-tokens.

When asked about the state of their town, she starts to narrate the history of the once-thriving port, the only centre of communication to the Eastern lands. They eventually became a wealthy community, what with all the profits that they gained from the trades.

Unfortunately, Lord Drakan noticed this flourishing society and decided to use this as another hub for gathering blood-tithes, as was the norm in Morytania. Helpless, the citizens bowed down to him, leading to their dwindling numbers and a diminishing commerce in the port.

During this time came a man, named Necrovarus, from the eastern lands. He was viewed as learned and respectful, possessing knowledge unheard of even amongst the brightest of them. Claiming to be brought there by a vision, Necrovarus helped save their town with the discovery of an underground source of energy, emanating power potent enough to repel Drakan's minions. Thus was built the temple of the Ectofuntus.

Although they found a way to avoid the tithes, the townspeople slowly became affected by the ecto-power and were trapped in this world as ghosts, unable to pass over. Necrovarus, using his psychic powers, also created a barrier that kept them in the port.

Velorina asks you to speak with Necrovarus and try to convince him to set them free.

The one that got away...

Talk to Necrovarus at the Ectofuntus just outside the town. Unfortunately, he'll be less than cooperative and even gets rather irate with your involvement. Re-enter the city and talk to Velorina again. She mentions a woman that was a disciple to Necrovarus and was privy to his darkest secrets, although being loyal to her friends. She had fled before Necrovarus took over, and so Velorina wants you to locate her and ask her for help. Now is a good time to get a bucket of slime via the pool of slime below.

Grab the items from the bank in Port Phasmatys and head towards Canifis. If you already have nettle tea, you can take the lodestone to Canifis, otherwise you will need to make it on the way there:

With the tea, head north-west of Mazchna over to the east side of the Slayer Tower, where there's a small house. Talk to the Old Crone, and ask her about Necrovarus. She'll tell you about how she wants some nettle tea to refresh her aged memory.

Talk to the Old Crone again, offering her the tea, but she'll only drink it from her porcelain cup. Be careful not to drink the tea. She hands the cup over, so put the nettle tea into it and add a bucket of milk to it. Give her back the tea-filled cup to refresh her memory.

The crone tells you about a way through which you can control Necrovarus and command him to do whatever you want. She could enchant an amulet of ghostspeak to temporarily gain control over ghosts in addition to talking to them, though it will only have a single charge. To do this, she needs three items: The Book of Haricanto, the robes of Necrovarus, and a translation manual.

Once you have been told about the three items for enchanting, do not leave! Talk to her again to begin on finding the book.

Speak to the old woman again and ask if there's anything you can do for her since she's been so helpful to you. She'll mention her long lost son and gives you a model ship that belonged to him.

Use your silk on the model ship to fix the flag mast. Head to the broken-down ship just north of the farm allotments near the Ectofuntus temple. Walk onto it, and climb up a couple of ladders to get to the top deck (the second ladder is next to the cabin).

A small box at the top of the screen should now display the windspeed. When the windspeed is low, search the mast to find one of the three colours that you must use to re-colour the model ship; repeat until you have correctly dyed all the three mast sections. The colours are random for each player, and some colours can be made as follows:

After dyeing the model ship correctly, climb down a level and speak with the old man. Show him the toy boat, and he'll recognise it. You've found the old crone's son! When you return him his ship, he will give you a chest key. Enter the captain's quarters, and use the key on the chest inside to receive a piece of a map.

Proceed to the north-west part of the ship's deck, where there is a gangplank you can walk out onto and get to some rocks. Jump along the path of rocks (you need 25 Agility to attempt this part). It is possible to fail the jumps, which will cause you to lose 50 to 510 life points. At the end, you'll find a closed chest containing another map piece. Retrieve it, and jump back to the ship.

Climb down to the lowest level of the wrecked ship, and open up and search each one of the chests (locked chests can be ignored) - one of them houses a level 42 giant lobster (weak to Air spells) who will jump out to attack you. Kill it, and search the chest again to get the last piece of the map. Now fit all the map scraps together to form a treasure map.

Head back into Port Phasmatys. Grab the treasure map and a spade, and head north-east of the bank to the ghost captain of a small rowing boat; talk to him to travel to Dragontooth Island.

You must have the map and a spade in your inventory before proceeding to dig, as the spade on the tool belt will not work. Once on the island, use the map to find the treasure. Stand beside the Statue of Saradomin, under his extended arm is the start point. The map's drop down menu has a "follow" option. Dig at the marked spot to obtain the book of haricanto. Finally, have the ghost captain take you back to Port Phasmatys.

Talk to Ak-Haranu, a human wandering around the docks, just east of the inn. He'll tell you he has the manual, but he'll barter it for the famous Robin's signature on an oak shieldbow. Walk inside the inn, and talk to Robin, who challenges you to a game of Rune-Draw.

The game is very similar to blackjack. Players take turns drawing runes from a bag of 10 runes. Each rune has a different point value, with air being worth 1 point all the way up to a nature rune being 9 points. If you choose the "hold" option, you choose to not draw any more runes. The player with the most points wins the game. However, drawing a death rune results in an automatic loss. There is a larger chance that you will draw a death rune than Robin.

A bet of 25 coins is placed every game, and you must win four hands - enough so that Robin owes you 100 coins; losing hands does not affect your win counter towards the 100 coins. After you threaten to tell the ghosts of what he is doing, he will give you a signed oak shieldbow to repay the debt.

Take the signed shieldbow back to Ak-Haranu and he'll give you the translation manual.

Items needed: A bucket of slime.

Speak to the innkeeper, and ask him if he has any jobs for you. He will give you a bedsheet that he wants you to take to Robin. But rather than doing that, just take it with you.

Grab a bucket of slime and use your bedsheet on it, or simply go to the bottom of the ectofuntus and dip the sheet into the pool. If you forget something and try to charter a ship from Port Phasmatys, the sailors will not let you travel with the bed sheet requiring you to bank it first.

It's not too hard; as long as you don't talk to the same person twice in a row, you can ask the same two or three ghosts for all 10 signatures. Don't worry if a ghost asks for ecto-tokens - simply ask a different ghost if you don't want to pay.

With all 10 signatures, talk to Gravingas, who will ask you to go to Necrovarus and present him with the petition form. Necrovarus will get so angry over the dissension that he'll burn the petition and drop a bone key during the process. Pick it up and head upstairs. Use the key on the locked door to get into his room, as the nearby ghost disciple won't let you in. Open and search the coffin to find the mystical robes that belong to Necrovarus.

Return to the old crone with the robes, book, manual, and your amulet of ghostspeak in your possession (cramulets do not work). Hand over the items to her, and she'll cast the spell on your amulet, doing the old "dance" emote.

Equip the newly acquired enchanted amulet and head back to the Ectofuntus. Talk to Necrovarus and command him to release all the ghosts he's holding. You can also ask him to tell a joke or do a chicken impression without discharging the amulet. Just keep going through the conversation until the very end.

Enter Port Phasmatys one last time, free of charge, and talk to Velorina to tell her the good news. 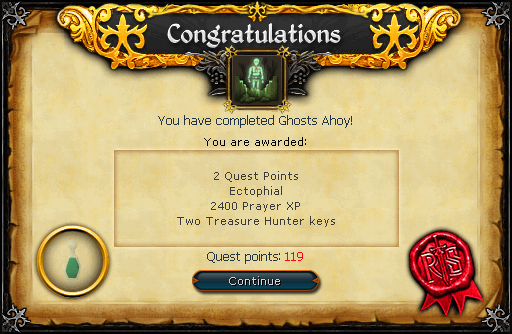