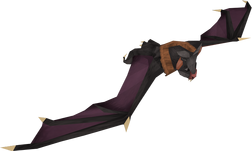 A giant bat is a larger version of a Bat. They may be substituted for bats, which are given out as Slayer assignments mostly by Mazchna. They attack with magic, which does not hit particularly hard, but is very accurate even against high level ranged armour. Lower-levelled players may need some food if killing them. There are also non-attackable giant bats in the Brimhaven Agility Arena. They always drop Bat bones and have a chance of dropping a piece of batwing.