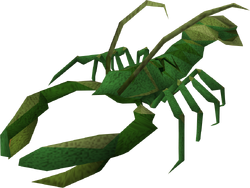 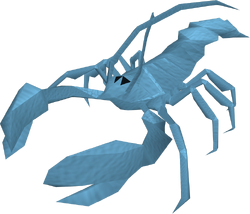 Giant lobsters are encountered during quests such as The Slug Menace and Rocking Out. These lobsters are aggressive even to characters who are more than twice their level. Giant lobsters drop seaweed, oysters and coins.

Level 40 giant lobsters are encountered during The Slug Menace. Bailey says that they are fished up as normal lobsters by the fisherman at the Fishing Platform, then their shell is cracked with a hammer, and a Sea slug is inserted. They then go back into the sea and head towards the mainland. Later on, they are found in the Witchaven Dungeon. Oddly, these lobsters count for Scorpion slayer tasks.

Level 70 Giant lobsters can also found in the Dragontooth Shipwreck, a submerged ship just off the coast of Dragontooth Island. They are encountered during the Rocking Out quest, but cannot be trained on after the quest as you can not access the ship afterwards. These lobsters appear somewhat similar to the lobster encountered during Ghosts Ahoy, but are considerably stronger.

Retrieved from "https://runescape.fandom.com/wiki/Giant_lobster?oldid=19077059"
Community content is available under CC-BY-SA unless otherwise noted.