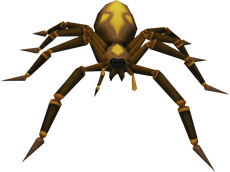 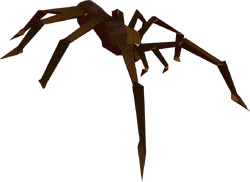 The giant spider is a ranged-based monster in RuneScape suited for low level combat. They come in a variety of levels, and are weak to crush attacks, so a mace or warhammer will dispatch them quickly, although any melee weapon can be used. They have moderate resistance to ranged and high magic resistance, and will range the player right back if attacked with these styles, so training these skills on them is not advised.

Many new players kill the level 2 giant spiders to train combat because of their low combat level and close location to the starting point in Lumbridge. They primarily attack with ranged. Giant spiders in Lumbridge sometimes have a 1 out of 6 chance to drop an Earth talisman.

The level 33 variants are rarely trained on, and are aggressive. They also use ranged in combat.

The level 39 variants are fairly accurate and can hit up to 103 life points if you have low Defence, so it is recommended that players wear at least full rune armour and bring food. Alternatively, members can bring a bunyip, Saradomin godsword, unicorn stallion, a full set of Guthan's armour, or an Enhanced Excalibur to heal with.

In the Stronghold of Security they don't drop anything.